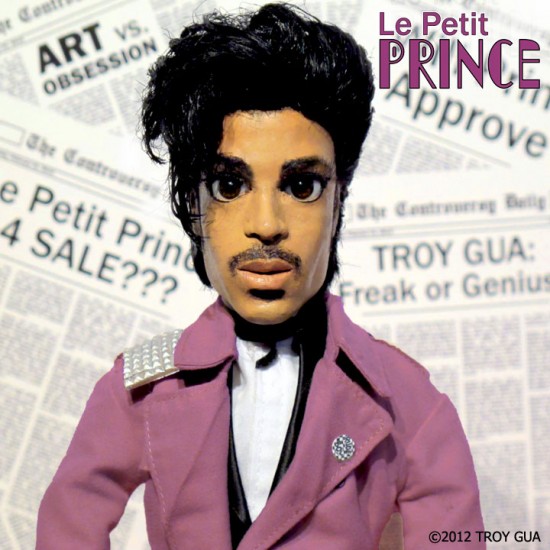 It’s been almost a year since Troy Gua’s Le Petit Prince appeared on this site. But unfortunately Gua’s meticulous miniature version of Prince the musician won’t make it through to what would’ve been its first anniversary. In what feels like an increasing climate of artists enforcing proprietary rights on fans who aren’t selling anything (for instance) Troy Gua, has received a cease and desist from Prince’s people. He writes:

Hello, Friends. It is with a heavy heart that I write this – I have been issued a cease & desist order from Prince’s attorneys. This means that the Le Petit Prince project has reached its untimely end and must be removed from the internet by Friday, November 16, 4pm PST. There are many points touched upon in the order, and I will, of course, comply with their demands, whether I agree with them as matters of artistic freedom or not. I simply do not wish to fight with my hero, and it is terribly disheartening to think that he may hold ill will towards me and this project. I wrote back to the attorneys and told them I would indeed comply, but wanted to address some of the issues brought up in their letter.

What follows is an eloquent letter, with insightful points and the sad (and common) reality that often, it’s best to keep a distance from your heroes, lest they prove themselves not heroic at all. 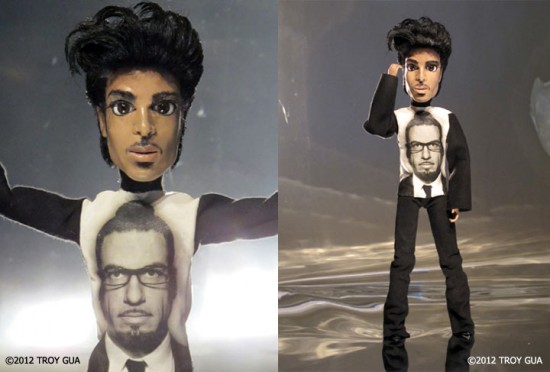 Any products sold are returning no profit to me – they are simply a meager means to fund and continue the LPP project, which is a work of fine art. And this funding, I would argue, is anything but “ill-gotten gains”. That term pains me, as I do not intend, nor have I ever intended to profit from Prince without his consent. I have, in fact, refused countless pleas to recreate the sculpture and make it available for sale because I felt that that would indeed be attempting to profit illegally. The recreation of album art and iconic imagery, on the other hand, I felt was within my creative rights as an artist. This is artwork that I have made as a loving tribute to an artist that has inspired me for decades, and has shaped the person I have become. And this tribute has grown into something that I never foresaw nor intended – a joyful and positive experience for many, many people around the world. It has, to my utter amazement, brought so much happiness to so many, building a following and a momentum that has demanded it endure and expand. 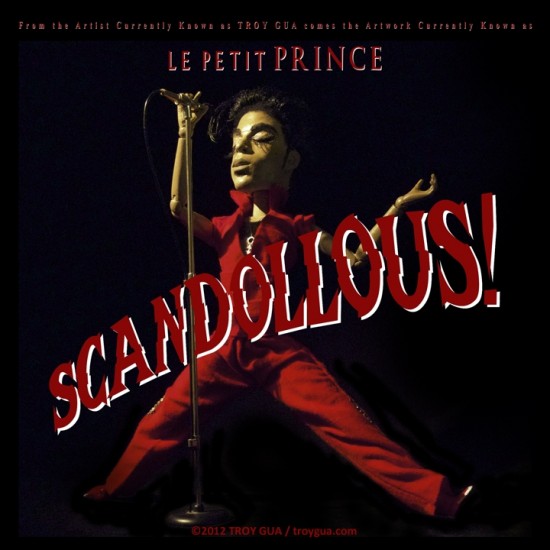 I have, actually, attempted through modest connections to Mr. Nelson, to contact him to no avail. He is not an easy person to reach out to. I, on the other hand, am very easy to engage, and was actually, perhaps foolishly, hoping for contact from him regarding this project in a much more congenial form. If I had any possible way of reaching Mr. Nelson to ask him his thoughts on this matter or to propose a creative business venture, believe me, I would have. I would love nothing more, and would relish the opportunity to do so, still. The words “thank you” could never adequately qualify the truly staggering gratitude I feel towards everyone who fueled the passion for this project with their words of support and praise, with their love and positivity, and with their all around good will. This project grew into what it became because of you. Although I am saddened beyond words that it has reached its end, and that it has ended this way, I am also deeply grateful and happy beyond words that I’ve had this rare opportunity to make so many new friends, to make so many people smile, and to make so many tiny sets of funky clothes. I hope we can continue to be in touch in another corner of this great big universe somewhere. And I hope you had fun. I know I did.For LPP, Troy Gua signing off… 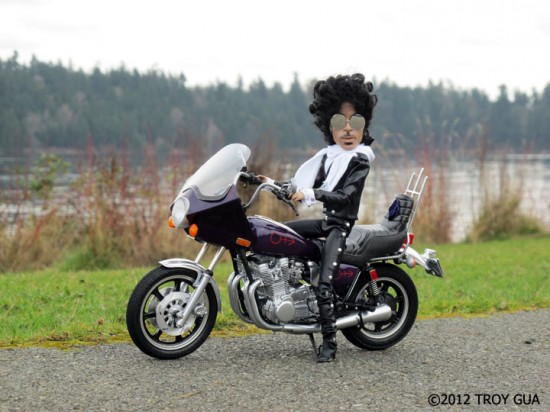 Sad as the outcome is, in a way, I can’t help but think that second to validation from and collaboration with Prince, a C&D from Prince is the best possible ending to this project. Gua (probably) couldn’t (or wouldn’t want to) keep this going forever, and a C&D from Prince guarantees that Gua’s LPP artwork transcends niche culture into the greater sphere of pop culture. So, as much as Gua is unhappy to stop the project prematurely, I hope that he finds some solace in all the new people who have found happiness in the project as a result of the new attention. 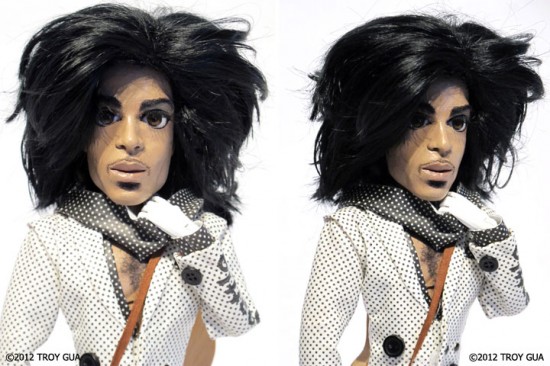 Troy Gua’s Le Petit Prince project and its associated LPP’s Facebook page goes offline in a few hours at 4PM PST. Check it out, and save some pictures. Revisit my first post on LPP and click through for a few more pics. They can’t C&D us all, right? 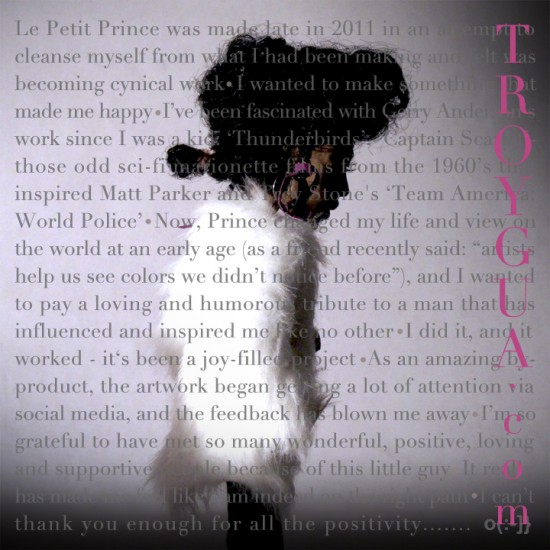 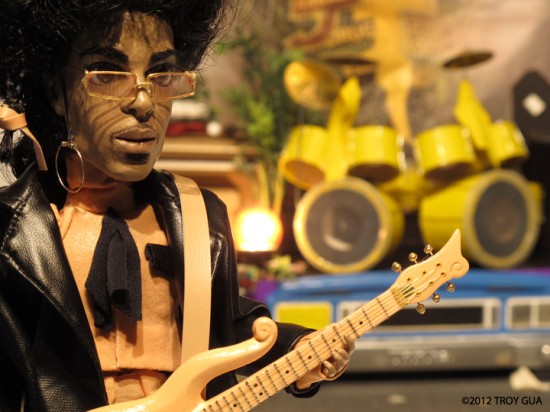 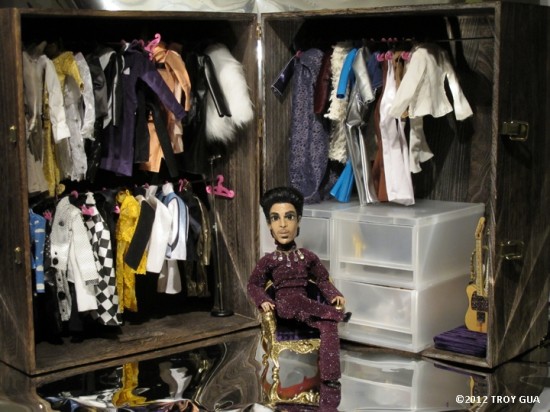