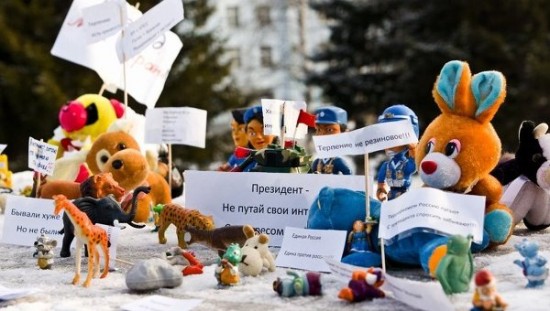 Police in the Siberian city of Barnaul have asked prosecutors to investigate the legality of a recent protest that saw dozens of small dolls – teddy bears, Lego men, South Park figurines – arranged to mimic a protest, complete with signs reading: “I’m for clean elections” and “A thief should sit in jail, not in the Kremlin”. #occupySIBERIA 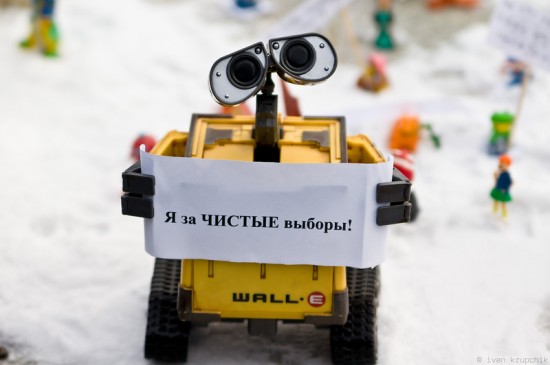 You go, Siberians! Americans–especially those of us who live in the Bay Area–can’t imagine life without the ability to freely demonstrate. It’s a daily occurrence in downtown San Francisco. And while we do get our share of crazies, we have the right to make protest signs against their protest signs. 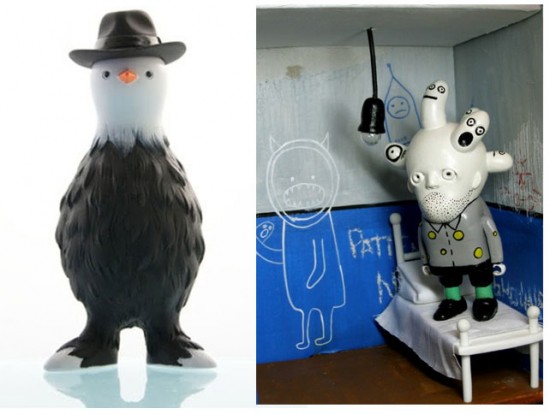 But such freedoms are not the norm in Russia and other parts of eastern Europe. If you need to personalize it, think about life under these type of restrictions for artists in our scene like Moscow’s Sergey Safonov and Kiev’s Patient No. 6. Toys do make great surrogate activists, though. They can soften a serious message and bravely take a bullet. Remember Brian McCarty’s Middle Eastern War Toys project and the recent stateside Occupy Legoland? 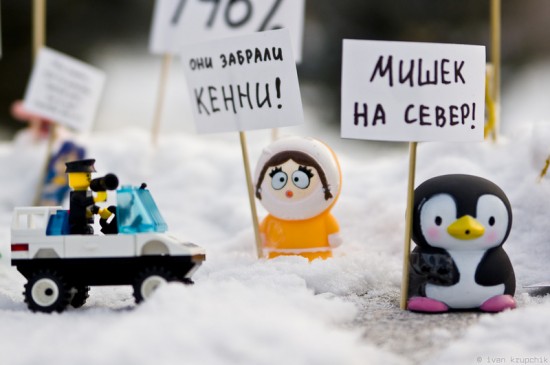 Girl: "They took Kenny!" (reference to South Park TV show) | Penguin: "Bears to the north" (Bear is the symbol of government party and North is the direction of the jails.)

But back to Barnaul: Activists in Siberia set up the toy display after authorities repeatedly rejected their request to hold a sanctioned demonstration (like the kind held in Moscow) to protest disputed parliamentary elections results and Vladimir Putin’s expected return to the presidency in a March vote. Protests are happening all across Europe and spreading eastward fast. Click here to explore the map below. 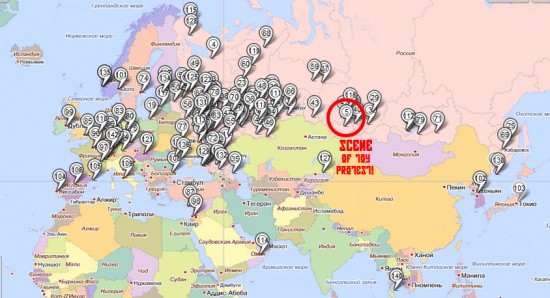 Around 2,000 people turned out in Barnaul on the day of the protest, an unprecedented number for the small city. Police were said to have examined the display carefully and written down each placard’s slogan. One of the protest organizers, 30-year-old IT specialist, Andrei Teslenko described the police’s move to “launch a trial against toys” as “absurd”. He said “no more than ten people” brought toys to the square in front of Barnaul’s Drama Theatre on January 7, and “no more than 15” joined the action a week later. However, thanks to the Internet, A LOT more of us are finding out about the protest this weekend. 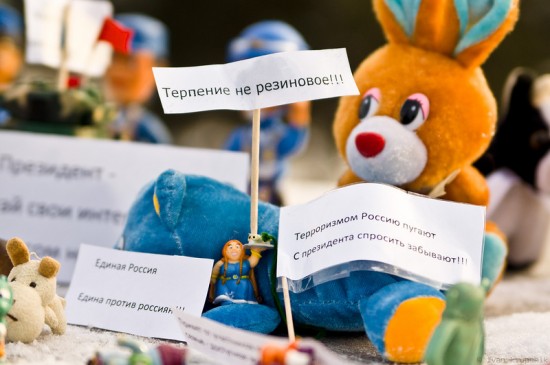 "Patience is not made of rubber."

Here’s what Andrei Mulintsev, the city’s deputy police chief, had to say about it:

“Political opposition forces are using new technologies to carry out public events – using toys with placards at mini-protests. In our opinion, this is still an unsanctioned public event. Somebody has brought the toys there and therefore expressed his opinion in such a way. People were approaching, looking [at the toys]… There is some kind of publicity in those events, right?”

I’ve reached out to my Russian friends for assistance translating the slogans on these signs. Click through for more photos and come back tomorrow for the translation! 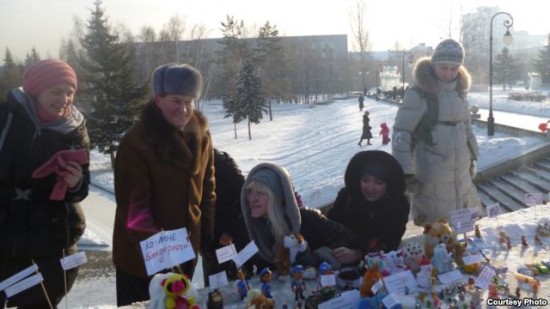 Prosecutor Sergei Kirei, with whom the police consulted added:

“People are not stupid. The figurines did not come there by themselves. They did not write the placards on their own. They have not invited anyone in social networks to join the public event. The toys were used as agitation material, [adding that those complaining of legal nihilism during elections have themselves] gravely ignored the law.”

I heard, but cannot confirm, that there exist photographs of the police literally whitewashing what appear to be 2cm footprints all around the protest area. Rumors also point to an audio tape of Mrs. McCormick reporting her son Kenny as having left South Park on his own, with the transcript being largely unintelligible until it reaches “They killed Kenny!” 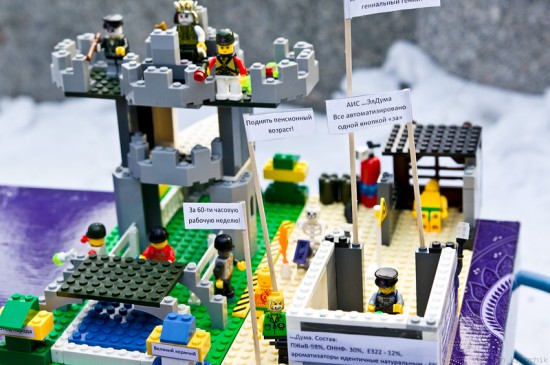 Lyudmila Alexandrova, a 26-year-old graduate student and protest organizer said that police tried to pressure them into shutting down the toy protest:

“They tried to tell us our event was illegal – they even said that to put toys in the snow, we had to rent it from the city authorities. The authorities’ attempt to limit citizens’ rights to express their position has become absurd. We wanted to hyperbolise this attempt and show the absurdity and farce of officials’ struggle with their own people.” 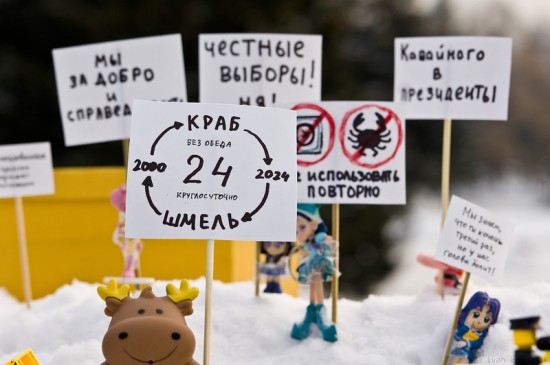 Teslenko, writing on Russia’s most popular social network, Vknotakte, finds the bright side at least: “While the authorities restrict our constitutional rights to freedom of peaceful assembly, the rights of toys have so far been untouched.”

The toy demonstration organizers face fines of up to $33 or arrest for a period of up to 15 days if found guilty of staging an unsanctioned public gathering and disobeying police orders. 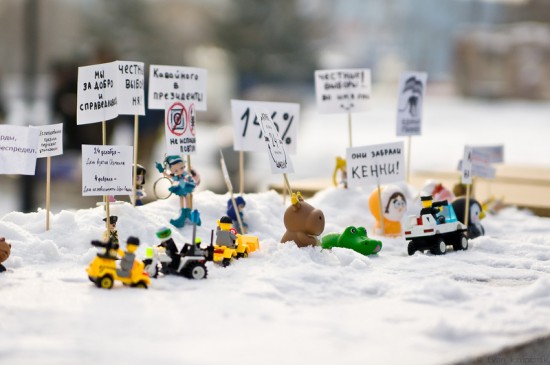 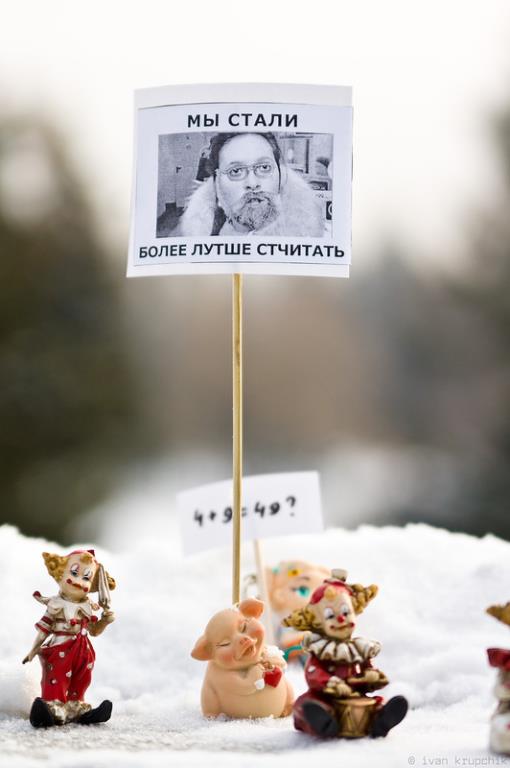 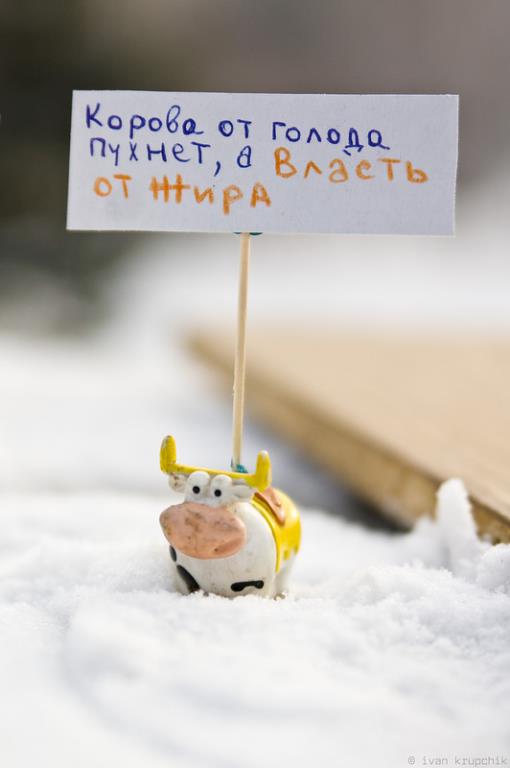 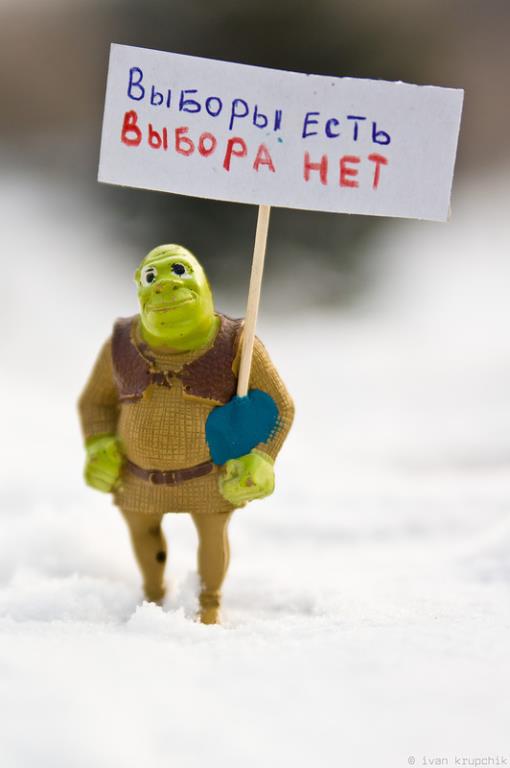 "We've got elections, but nothing to choose from." 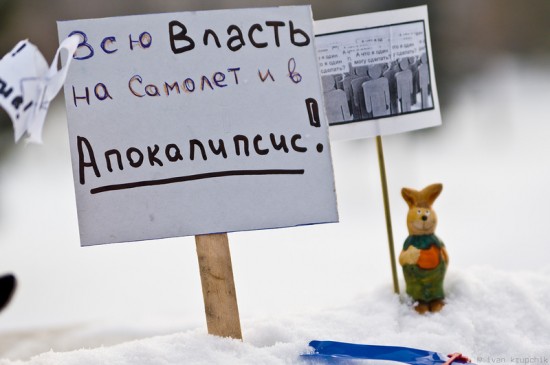 "Put the government to the plane on the way to apocalypses!" 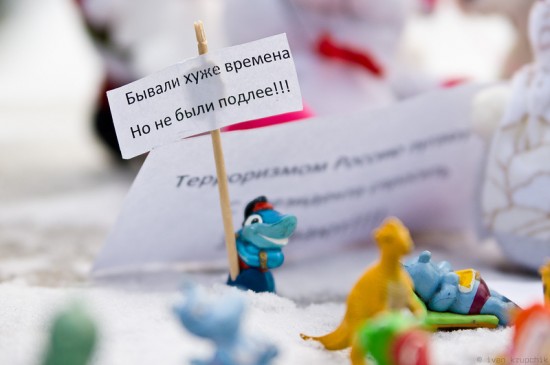 "We had worse times, but never as infamy." 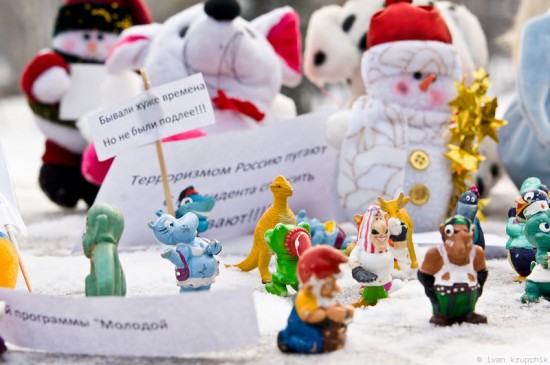 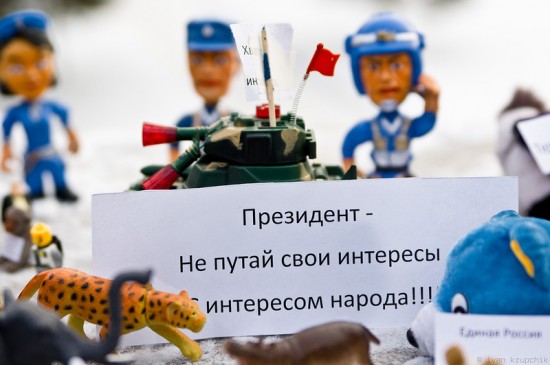 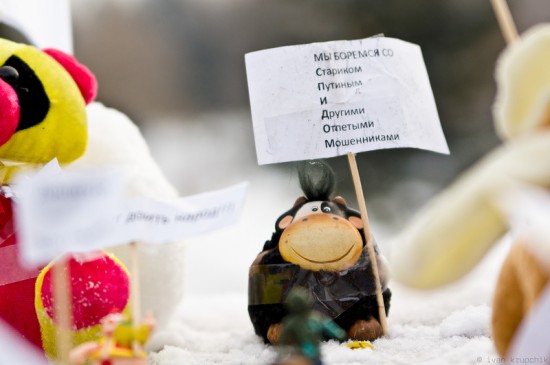 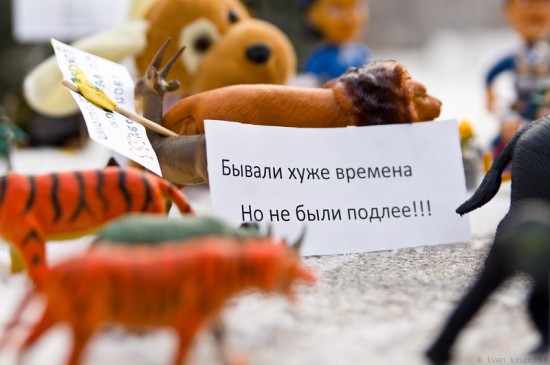 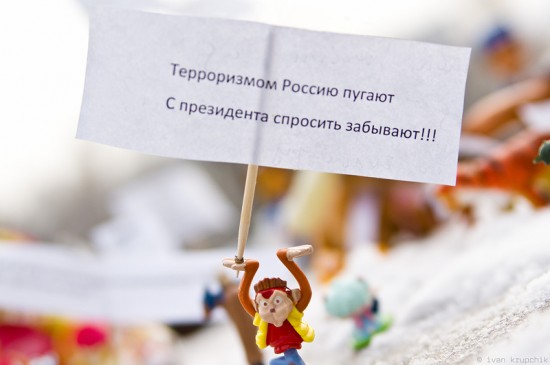 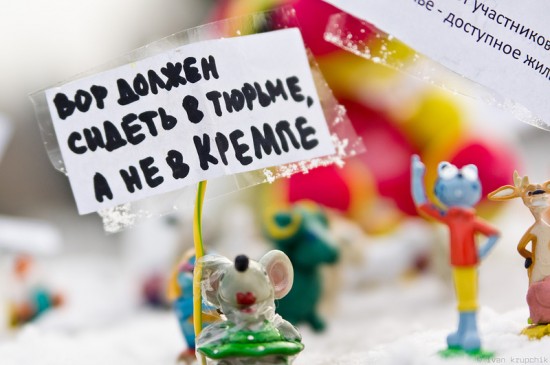 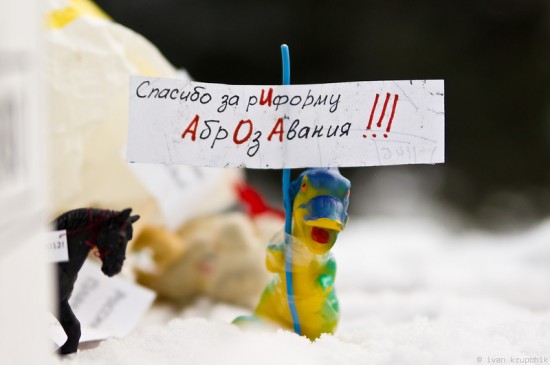 "Thanks for education reform." 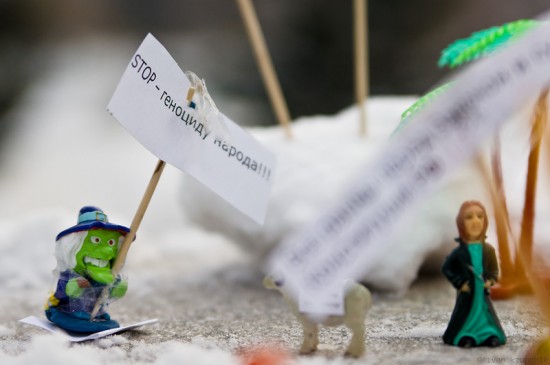 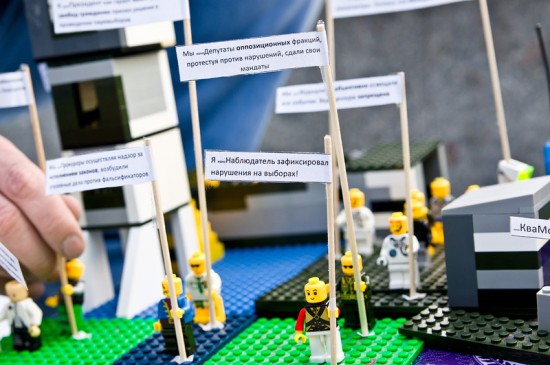 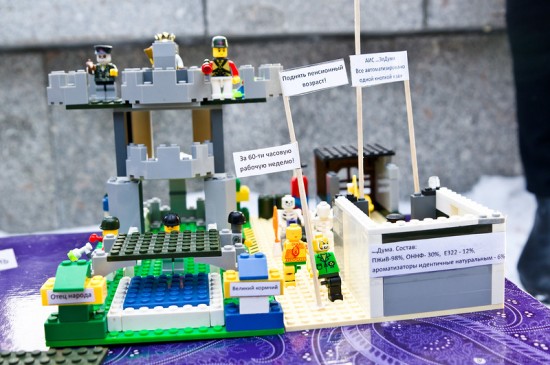 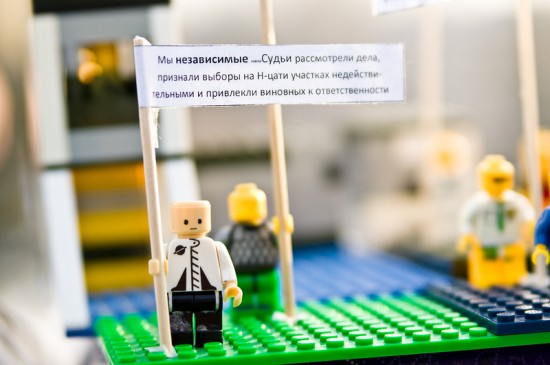 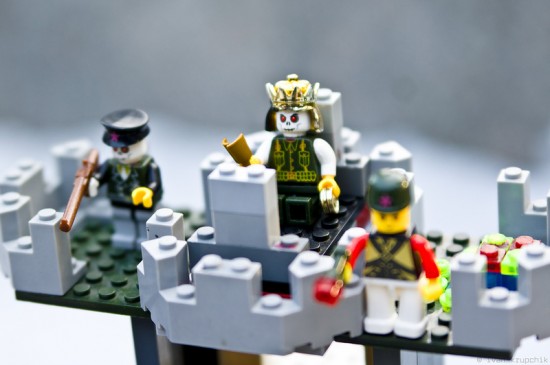 [Info via The Guardian UK. Photos via Ivan Krupchik.]