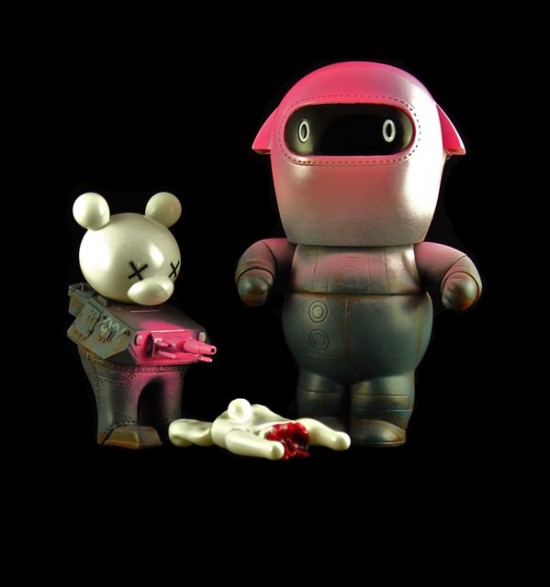 Most people think toys exist in an arena distant and safe from politics. Most people are not Bob Conge. I was really excited to ask PlaSeeBo to join LOVE MOVEMENT because I know he doesn’t do “safe”. Whether he’s commenting on the inhumanity of war or the greed of American banks, PlaSeeBo puts it out there. He also talks openly about toys as art and reveals that he once took out a student loan he didn’t really need so that he could go door to door and buy old toys from peoples’ attics. Yes he did. I’m a fan. 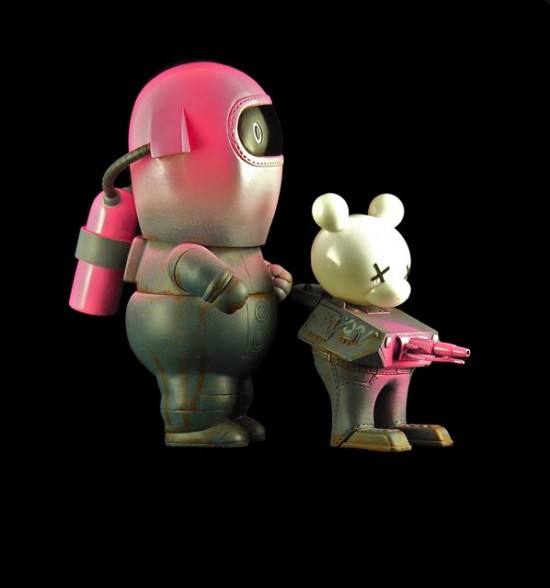 It all began that black and stormy night when Teddy was killed. He became separated from his squad while on a recon patrol and lost his head, literally. This is when Teddy, free from earthly concerns, saw the light. A pink light actually and it was flashing “Make Love Not War”. His first concern was to tell his best friend “T” of this wondrous revelation. T was still on the front lines when the ghost of Teddy appeared to him as a prophetic white bear head floating about 4 feet off the ground. T saw the light right away and transformed himself into Brigadier General Passion. He then fashioned the Love Gun from some old military parts for Teddy to command. Filling the Love Gun and his back pack tank with the pink Empathy Gas (as invented by John Lennon in 1971), T and Teddy embarked to save the world from its self. Ah-men!

Ah men, indeed. I can’t wait to put these figures up in San Francisco.