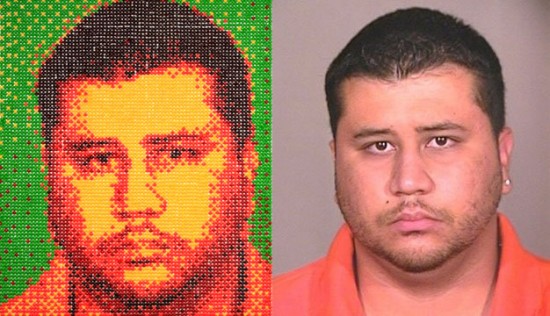 It’s been done by Jason Mecier (Whitney Houston in pills; Snoop Dogg in pot), Desire Obtain Cherish (dead celebrities in pills) and even that dude Dusty on Bravo’s Work of Art made a portrait using M&Ms. Now a Denver, Colorado artist named Andy Bell has used Skittles to make a portrait of George Zimmerman, the Floridian neighborhood watchmen who shot and killed 17-year old unarmed, hoodie-wearing Trayvon Martin. The “bite-sized candies” that were found on Martin’s dead body have subsequently come to be a posthumous symbol of innocence, at least in the world of popular culture/merchandising.

Tampa Bay News reports that Bell’s piece, entitled Fear Itself, “is the first thing seen when walking into the art gallery”. In an email to the Huffington Post, the RedLine Gallery explains: “Zimmerman’s fear directly resulted in Trayvon Martin being shot and killed. But in the end, the only thing he had to fear was a 17 year old and a bag of Skittles.” RedLine Executive Director PJ D’Amico adds: “I think we’re sort of using levity to sort of invite people to see that we’ve got to change how we see the world”. 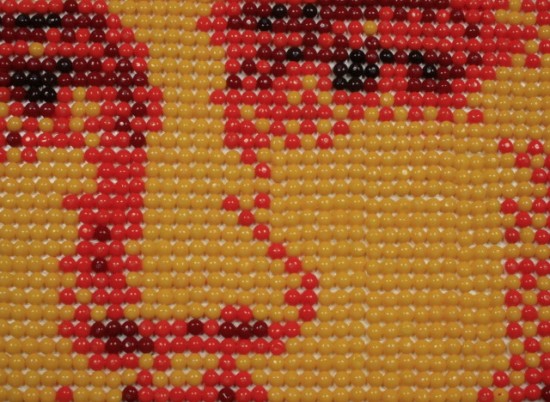 I’m sure D’Amico now regrets being widely quoted with an unconvincing soundbyte that uses “sort of” twice, but here’s what I think:

I don’t actually care if the RedLine Gallery jumped to promote this artwork before carefully considering its merit or message. RedLine is  a charitable arts organization. Had you heard of them before reading about Andy Bell’s Skittles portrait? I hadn’t. Go little arts engine, go.

Here’s my conceptual issue with this piece. Surely no one is more tickled than Mars, Inc., who manufactures Skittles, with the rekindled enthusiasm for their candy. However, in the context of the Trayvon Martin killing, Skittles has come to represent the “innocence” of this young man. Therefore there are two possible readings of this piece:

Finally, Fear Itself is on view at 2350 Arapahoe Street in Denver through June 1st, and I will personally send a big bag of Skittles to the first art patron to chuck a liter of iced tea at the artwork. I think Bell and RedLine would understand.