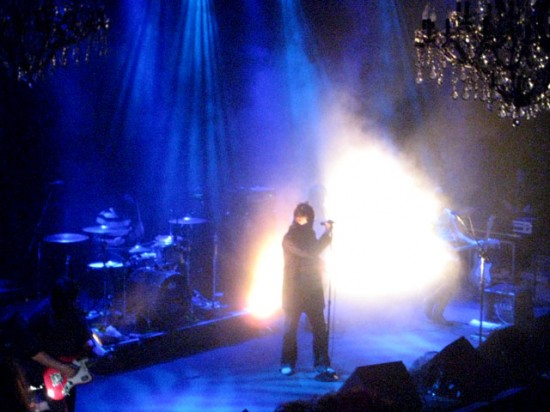 Post-punk Scousers, Echo and the Bunnymen (site/wiki), played The Fillmore last night. To be fair, the only original Bunnymen present were Ian McCulloch (vocals) and Will Sergeant (guitar). That’s all we needed, though, for a stellar set that lasted almost two hours with Ian’s voice in top form throughout. Classic tracks like “Rescue,” “The Killing Moon” and “Back of Love” sounded great. And no matter where I am, whenever I hear “Bring on the Dancing Horses,” I’m back in 1986 (R.I.P. John Hughes). Ian really enjoys concert banter, but somewhere between his mic’s amplification and his Liverpudlian dialect, I lost a bunch of it. Notably, I understood this much: Ian McCulloch likes that America got health care reform, and he thinks we should kill all pedophiles.

They launched into “The Cutter,” but it was pre-empted by “Lips Like Sugar” for the first of three false starts! At length, Ian said he couldn’t sing “The Cutter” because someone or something in the audience was making him smile. He did deliver the tune, though, and it was awesome. The encore included an extended version of Lou Reed’s “Walk on the Wild Side.” I’m often the oldest guy at a toy show and the youngest guy at a concert. I guess that’s because I like the art of today and the music of yesterday.

Tags:Echo and the Bunnymen, music, post-punk, San Francisco, The Fillmore