Here’s a neat animated gif / data visualization showing how cassettes dominated records in the 80s, only to be rendered nearly obsolete by CDs in the 90s. The chart stops in the year 2010, but you can kind of see where CDs are going…(I don’t know who made this gif, so if you do, please leave a comment, and I will credit the designer.)

On a related note, the Oxford English Dictionary announced last month that they will be omitting the term “cassette tape” from their future publications, since it’s not currently as useful as, among other recently added words, “sexting,” “woot,” and “mankini”. Oh yeah? Well can you make a RAD cassette tape closet out of “mankinis”? (Don’t answer that.)

The Huffington Post helpfully points out that: “A cursory Google search reveals numerous stories on a cassette comeback written in the last year, including ones by the Washington Post, NPR and the Daily Telegraph.” 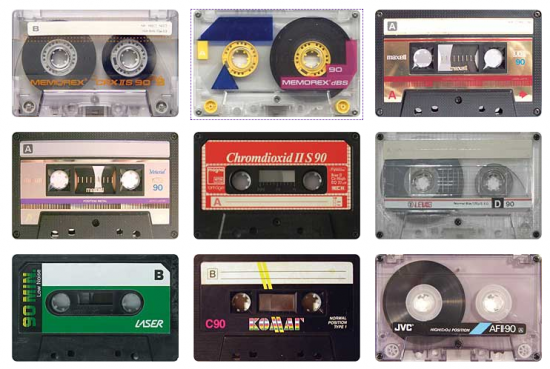 Bucks Burnett, a music historian in Dallas who owns the Eight Track Museum, was quoted in Huff Po:

Mankini? That settles it! I’m going to ban the Oxford Dictionary from the museum. I have a copy and I’m going to recycle it! This decision to remove the word [cassette tape] was made inside a Starbucks by 20-something editors on their lunch break. See if they still have the moon listed in the dictionary. I bet they do. Nobody uses the damn moon anymore, not even NASA.

I love that response. I’ve still got a whole bunch of my cassettes. How about you?