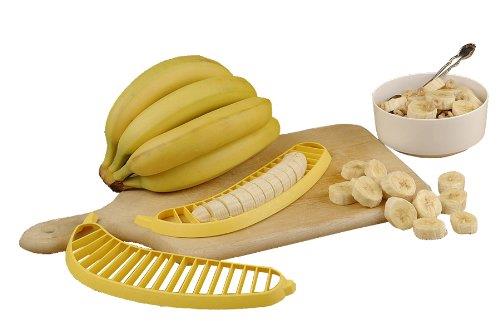 Behold the power of popjects: The Hutzler 571 Banana Slicer, a plastic gadget priced at $2.48, has over 3,000 reviews on Amazon. A sampling:

“What can I say about the 571B Banana Slicer that hasn’t already been said about the wheel, penicillin, or the iPhone….”—Mrs. Toledo

“Vietnam, Korea, Iraq…they have nothing on the war I struggle with everyday in avoiding eye contact while eating a banana.”—tdheld77

“I bought one of the used ones (let’s face it, it was cheaper). Am I going to need antibiotics?”—Alecsandyr

“Don’t ever try to cut a hot dog with it, it’s not a hot dog slicer you caveman.”—kitchengenius

“No more throwing bananas at the ceiling fan for me!”—lloydravn

I was laughing out loud. I was entertained. The humble Hutzler Banana Slicer has been given new meaning. Its merit as a kitchen utensil may be circumspect, but its comedic value is confirmed.

While you might be inclined to dismiss the Hutzler hoopla as first world stupidity, let me put it in perspective. Five or so years ago, viral irony swept over the Amazon reviews for Three Wolf Moon, a T-shirt depicting three wolves and a moon. Three Wolf Moon, designed by Antonia Neshev, is manufactured by The Mountain Corporation in Keene, New Hampshire. After the reviews, the shirt became a top selling item on Amazon, and Mountain responded by making more shirts. Due to the success of the shirt, the New Hampshire Division of Economic Development made Three Wolf Moon their “official New Hampshire T-shirt of economic development.” Apparently, they now give away the T-shirt as a “prize for innovation.”

By comparison, The Hutzler 571 Banana Slicer has already surpassed Three Wolf Moon in its number of reviews. I wonder if Hutzler’s honchos knows what an a-peeling popject they created? I hope the Banana Slicer wins a Peelitzer Prize! [Thanks to Aaron for pointing this out.]