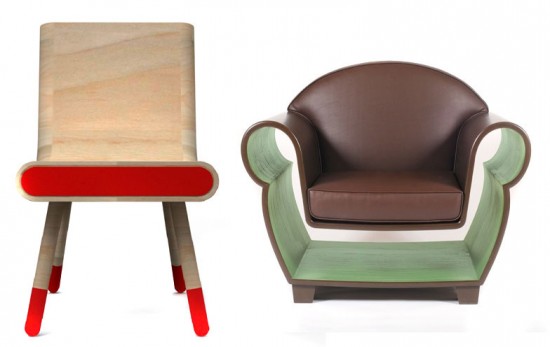 These two modern chairs (above) were designed with recession-proof secrets. They offer a potential solution to a perennial problem: Has this ever happened to you? As you head out to the drum circle with your sequined hat and sandals, you realize you’ve got no cash (below). Well, sequins or not, lifting up your couch cushion in search of coinage is simply not chic. That’s where Portugal-based Pedro Gomes Designs (above, left) and Vancouver-based Straight Line Designs (above, right) come in. 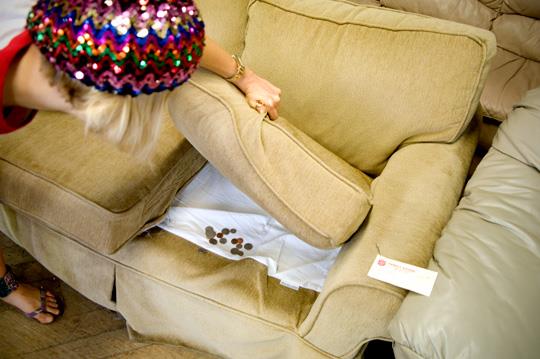 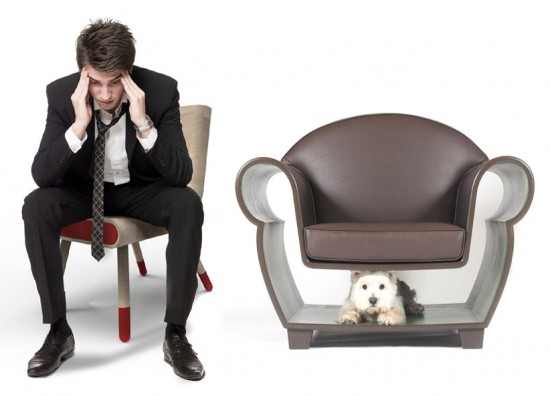 Both chairs were designed with open compartments to be used as storage. They are, essentially, stash chairs. Gomes explains his Anti-Crise Chair like this:

In an era marked by the economic crisis, we are pushed to analyze what is our role as designers in the creation of change and definition of new habits….The chair re-thinks the act of saving and connects it to a daily use object; Anti-Crise promotes the act of saving in a playful and interactive process. There is the traditional money pot, here reinterpreted; the visual and tactile notion of emergency-only access to the saved up money; and the material driven act where the chair is cut using a handsaw, which is an integrated element of the design.

So, basically, Gomes’ chair is a piggy bank that you can sit on and then saw though! 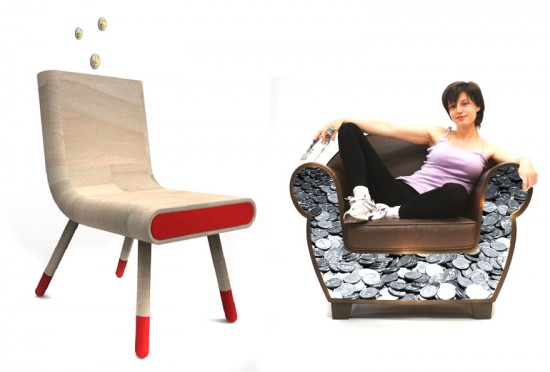 The chair is something different and surprising that represents simplicity, functionality and fun.

It’s not so simple though:

It was constructed from 618 individually cut pieces of Baltic Birch plywood, and upholstered in vinyl. The pieces were designed on a computer to be cut out via CNC so that they would each be identical, to ensure the seamless joints would accommodate the stress-load of everyday use.

And there’s absolutely nothing stopping you from stuffing the armchair full of coinage. A rumor (I just started) suggests that Ben Baller stuffs his DIY chair with diamonds.

So what do you do when the economy crashes and you need some quick-action liquidity? 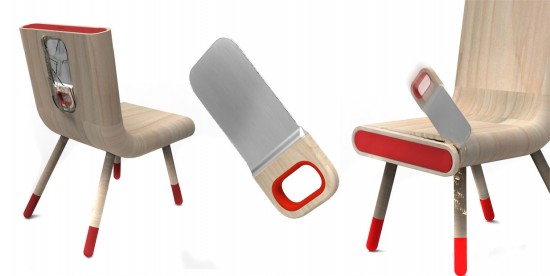 Sawing through the Anti-Crise Chair

In Gomes’ case, you smash the glass panel in back of the Anti-Crise chair to remove the on-board handsaw. You then, saw off the front cover of the chair’s seat, and boom: it’s raining money like you hit the jackpot. 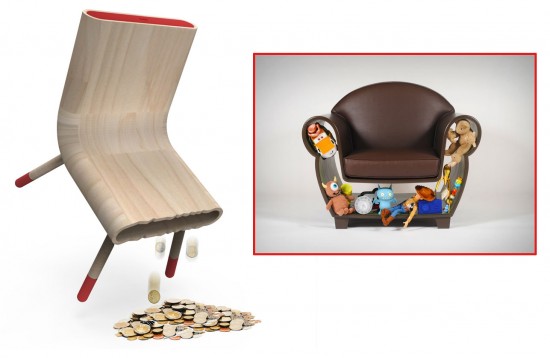 So maybe you go and take those coins from the Anti-Crise chair to the bank or the pawn shop or one of those Coin Star machines and convert them into greenbacks. With Beaumont’s chair, it’s more likely you’ve been stashing it full of books or toys, so look to eBay to turn your merch into money. For example, in the Beaumonth chair (above, right), if that’s really a 7-inch Uglydoll vinyl Icebat produced by Critterbox in 2004, it was originally sold for about $44.95 and currently has a secondary market asking price of $275. Now that’s liquidity. 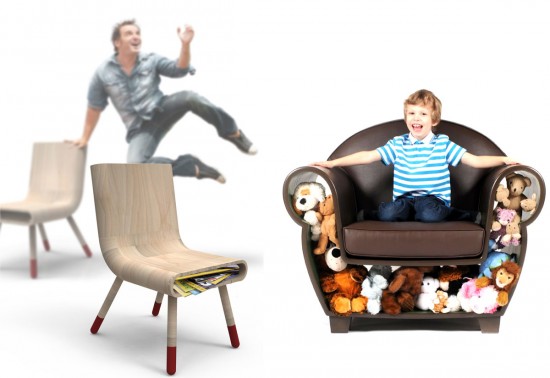 In conclusion, our formerly forlorn fellow (above, left) is now jubilant having repaired his car with the treasure trove of coins contained in his Anti-Crise chair. Similarly successful, the youngster (above, right) sold all that fancy designer vinyl and had the time of his life playing games at the boardwalk for deformed plush prizes. Everybody wins!

A prototype of the Pedro Gomes chair is coming soon. Email Straight Line Designs for pricing and availability of the DIY chair.