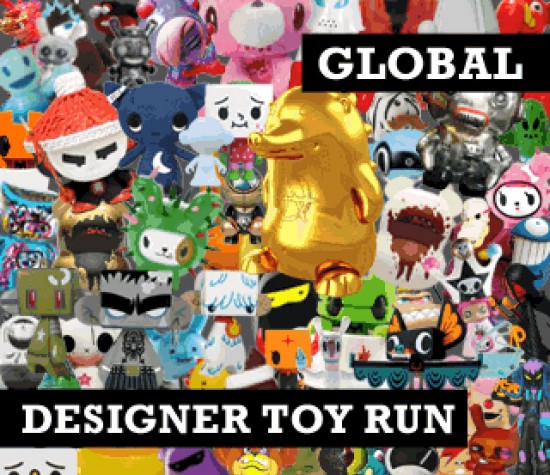 Right now, if you live in San Francisco, New York, Chicago or London, there are designer toys in your midst. They’re all around you in fact, but in order to see them, you need to open a window into the plane of reality in which they exist. Good news for some and sad news for others: you CAN do this without the aid of psychedelic drugs. You just need your iPhone and a free [download] augmented reality app called GoldRun. 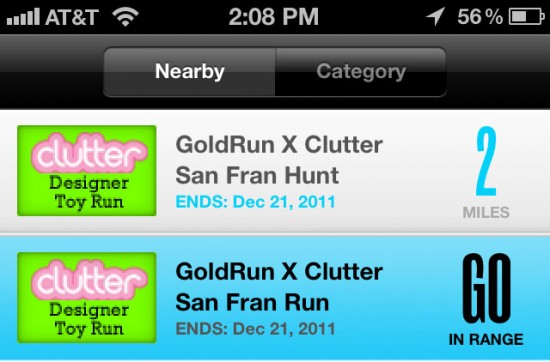 The first thing you’ll need to do when you launch GoldRun is sign up. Before you say it, I agree that signing up for things you can’t even preview is more than a little frustrating. I voiced this to GoldRun, and they gave me the sensible explanation that collecting a small amount of info is necessary for when players win prizes. Fair enough.

You can join the scavenger hunt at three different levels: Global Run (collect toys around the world), Citywide Run (collect toys in San Francisco, New York, Chicago and London) and Location-specific Run (collect toys in specific neighborhoods within a particular city). Click here or on the image above to open an animated gif in another tab/browser and view what’s available in each of the four cities. You can also interact with the grid here. 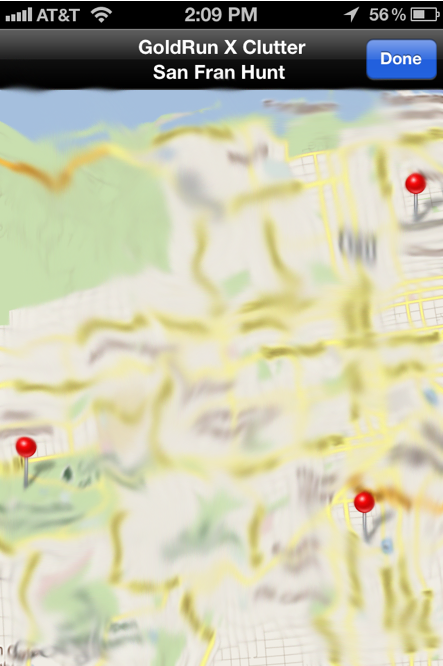 So how do you actually win the toys? First you have to locate them. By selecting the Featured tab within the GoldRun app, you’ll see all of GoldRun’s current campaigns including the one you want: The Designer Toy Scavenger Hunt. By selecting the Runs tab, you’ll see more options depending on where you are (e.g. if you’re in San Francisco, you’ll have access to the San Francisco Citywide run). If, by luck, you are in one of the three “hot zones,” you will see additional pin drops for more toys. 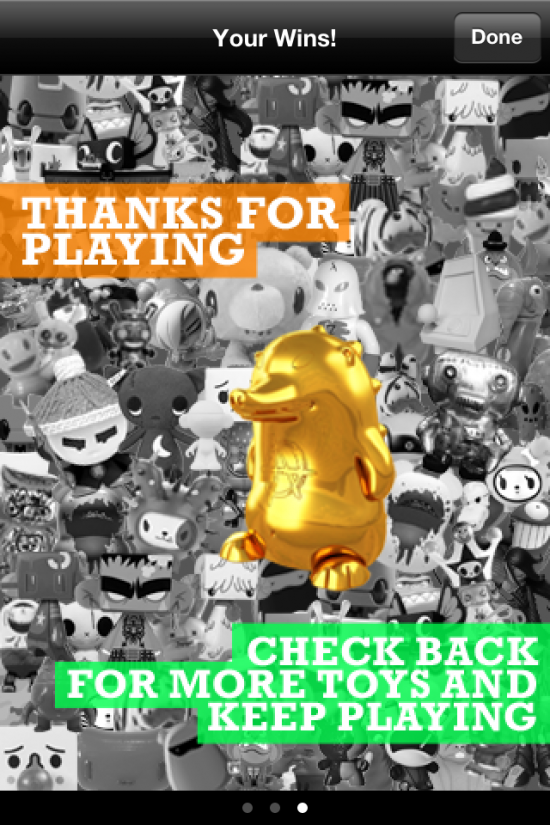 You’ll know when you’ve found a toy when the app displays a GO IN RANGE message. By clicking it, the toy should appear. At this point, you hit CAPTURE and then swipe to view your name on the leaderboard. Voila.

Your competition is other people who know about the scavenger hunt and are actively taking pictures of that particular toy within that region. The goal is to take as many pictures of the toy you want and be #1 on the leaderboard. This sounds a bit like those irritating FourSquare status updates that read like “Yosiell Lorenzo has just ousted the Mayor from CupcakeLand,” but, hey, there are some cool prizes at stake. Players receive points for each picture you take. At the end of the run, winners are declared, and real prizes are dispensed in the real world.

Most of the prizes are toys that have been out for a while, but there are still some cool pieces in the mix, and well, free is free. I’m biased of course, but I recommend looking out for the special Frank Kozik x MAQET GOLD Heathrow if you’re in San Francisco. For specific info on how to find that trophy hedgehog, check the MAQET blog. For a complete list of artists participating in the Designer Toy Scavenger Hunt, see the press release here.

GoldRun’s promotional scavenger hunts are a cool and fun idea, but perhaps one that is a bit challenging to explain. (There’s also the issue of timing: right now, many people in major cities are otherwise “occupied”.) I wrote this post because, despite having my 15 seconds of local fame with augmented reality and reading a bunch of other people’s blog posts about this Designer Toy Hunt, I felt like I still couldn’t make sense of it. I think I’ve got a better grip now, and I hope maybe you do too. I’m recusing myself from game play because I know where the gold Heathrow is, but I’ll try to give you clues. Please leave a comment if you join the hunt, and let me know what you think of it?