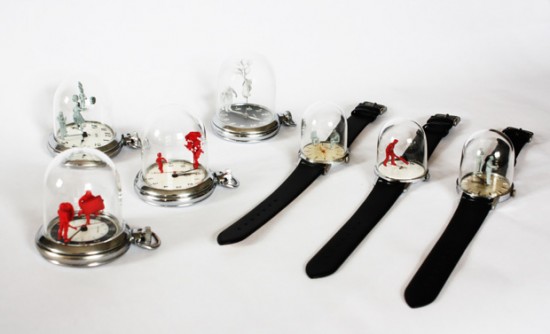 With wax figures, glass domes and watch parts, designer and ‘thinkeruper’ Dominic Wilcox has created analog animations that have the effect of tiny zoetropes on Ketamine. The idea to make these mini vignettes came to Wilcox during his Speed Creating project, but he “decided it was too good to rush”. After showing Dezeen Space a prototype, they commissioned a collection. Wilcox’s watch sculptures are being exhibited at Dezeen in London now through October 16th. 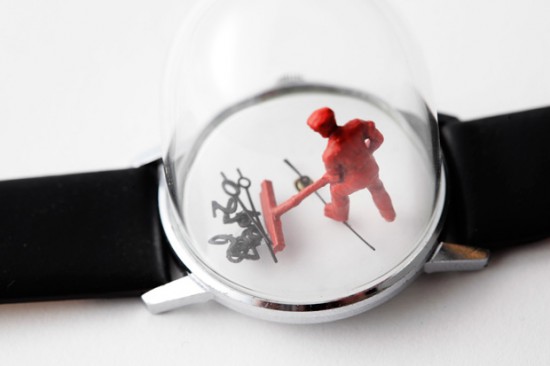 Watch sweeper: the numbers and hands are swept away on the second hand.

I like this one aesthetically and conceptually. I wonder if wearing it would make me feel anxious or zenlike? The sweeper sweeps the time continuously. Time passes without our control. Does the watch remind us to get up from our computers and run through a field of poppies? Or does it tick with the sweeping hand of a beckoning deadline? 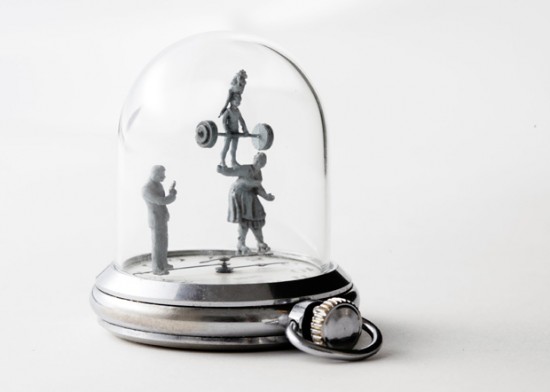 A man so engrossed in his iphone that he fails to notice a monkey balancing on the head of a weightlifting boy on the arm of an elderly roller skater.

We’ve all been guilty of this. I love Wilcox’s descriptions of the scene the engrossed iPhone user is missing. This watch sculpture is a PSA. It reminds us that we exist in the present time, and as seen in the previous watch: time doesn’t wait for us to catch up. We can send that text message or take that photo, but the elderly roller skater with the weightlifting boy and the balancing monkey will skate on by. And we will miss a moment that happened.

Click through for a brief video showing the full series of Dominic Wilcox’s watches.

I wish there was a way to get an affordable production model of one of Wilcox’s watches. It seems like it could be just the right amount of stimulation/engagement for people who need such things in order to focus in on to meditate. 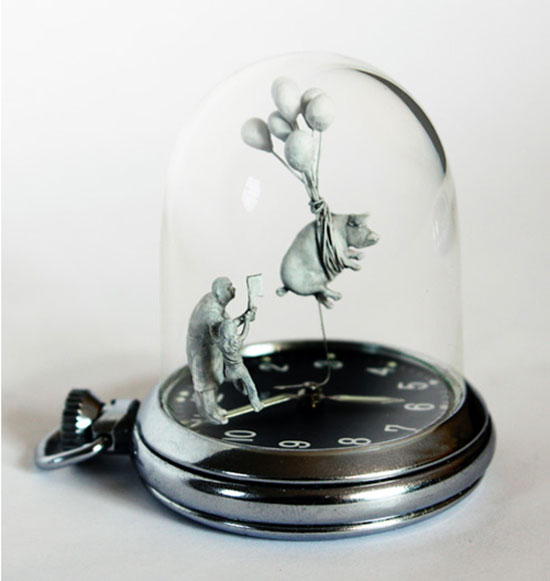 Adventures of a young vegetarian : a small girl attempts to stop a butcher chopping up a pig by hanging on his arm while the pig floats away.

This is another great one. It’s almost as if we’re walking into this story midway. Perhaps this young vegetarian had a two-tier escape plan for piglet. First, she tied him to the balloons and yelled, “Fly, fly away! You will never be bacon!” But in all that shouting, the butcher heard and saw the commotion. The butcher came at the young vegetarian with a butcher’s knife, but the young vegetarian had recently fixed herself some meth, and thus the butcher was no match for her. The pig landed in the next town over. We need another watch to tell us the rest of the story, Mr. Wilcox! 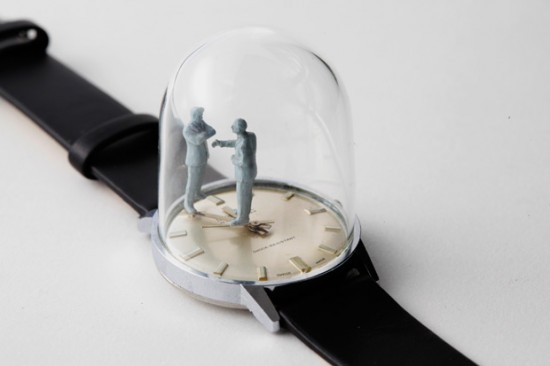 One man stands with arms folded while another moves around in continual hope that his hand will be shook.

Here’s another I can relate to. Just like the hands moving around the watch face, we humans do a delicate dance. It’s not only with handshakes, but smiles and hugs and even kisses in some cultures. This particular watch sculpture is very much tied into Wilcox’s oeuvre, “the territory of the ‘everyday’: Everyday objects, environments, buildings, human interaction, no area of normality is out of reach.”

Check Wilcox’s blog for his latest ideas. He also has a shop with objects and drawing. If you dig his designs, why not tell him on twitter @dominicwilcox?