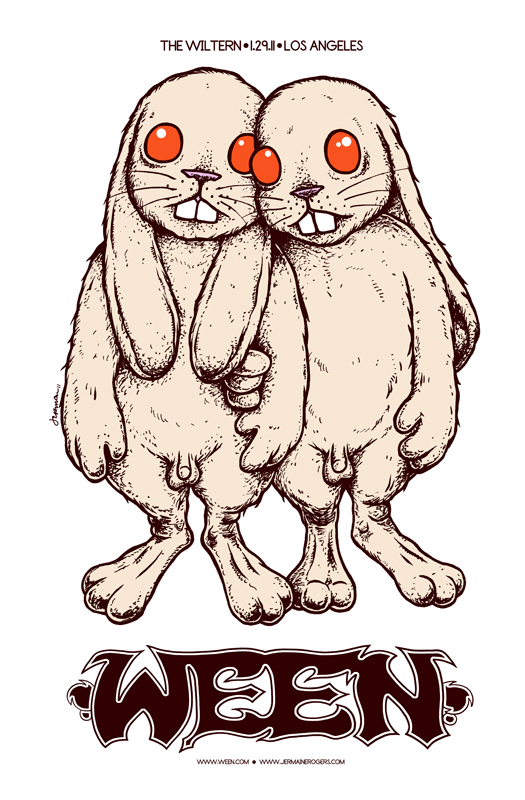 This is a really rad poster for the final date of Ween‘s west coast tour. I’ll let Jermaine Rogers do the talking:

I primarily wanted this image to be a message to Californians. This show was in the state’s most populous city. It’s just a friendly reminder to be fair… and to be leaders. MLK said that a ‘right deferred is a right denied’. The next time you get the chance, California… lead the way. Be fair. With so much scandalous hate in the world, I find it strange that some folks get so bent out of shape when two people decide that they just want to love each other. Adult to adult, consensual LOVE. Why do you care?

I couldn’t have said it better. If you stop and think about all the things we need to sort out in the world, it is so obviously ridiculous to dedicate even a moment to denying the rights of our fellow humans. As Jermaine says (and I now emphasize): WHY DO YOU CARE?

I would buy this poster in a minute if I liked Ween, but I’m one of those people who doesn’t dig hanging up posters for bands I’m not into. But bravo to Jermaine for standing up for a cause and making a bold visual statement. You don’t see genitals on Dunnys, do you?!

The print above is an edition of 100 signed and numbered for $50 each. Signed silver and gold foil editions in a lower run will also be available on Friday, February 4th at 3PM EST / 12PM PST at JermaineRogers.com.

While I’m here, I have to hand it to Jermaine and crew for upping the ante on one more level: They’re utilizing QR codes:

Exactly one hour before the above editions go on sale, a handful of extremely rare WEEN variants will be available at a hidden location on the web. We are talking less than 8-10 prints. The location will only be revealed via QR CODE. What is QR CODE, you ask? It’s a new way of communication.
Here’s what to do:

– GOOGLE ‘QR code’
– Familiarize yourself with the concept.
– Using your smartphone (i-phone, DROID, Blackberry, etc.) download a ‘QR READER’ app. They’re free.
– Be ready to use it on Friday, Feb. 4th at approx. 2:00PM EASTERN (11AM PACIFIC) at the Jermaine Rogers Facebook Fan Page: http://www.facebook.com/JermaineRogersArt

That’s it. Have your phone and a computer handy.

Cool all around. QR codes…the technology of the future (or at least Japan).