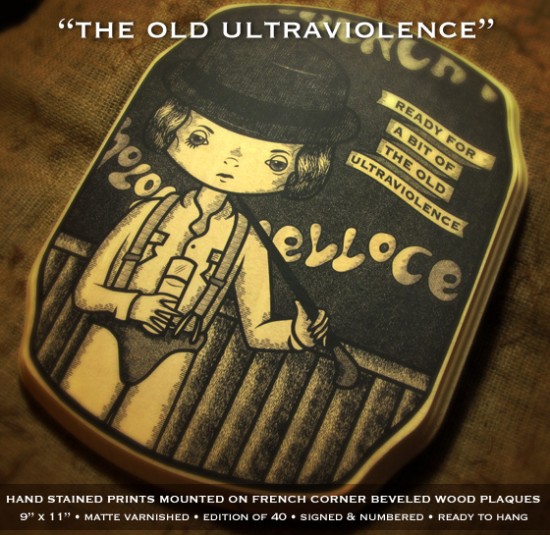 Yosiell Lorenzo has a new hand-stained wood print based on the classic Kubrick film, A Clockwork Orange. He describes the film as “incredibly dark and violent” and says it has “always held a strong fascination” for him. The prints are 9″ x 11″ and mounted on French corner beveled wood plaques. They’re limited to an edition of 40 signed and numbered prints for $45 (including domestic shipping) here. 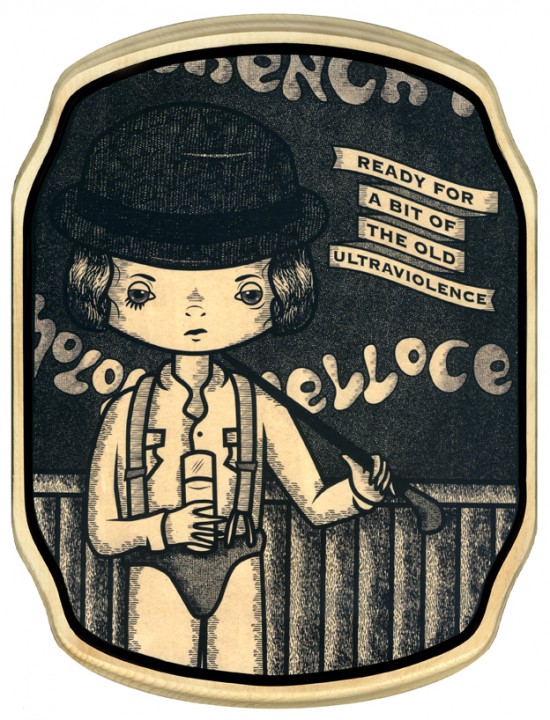 What? You mean you never read the Anthony Burgess book that spawned the movie? Dear readers, I’m shocked. You must read it at once, and your timing is impeccable because the book was restored and released in October to mark A Clockwork Orange‘s 50th anniversary:

A newly revised text for A Clockwork Orange’s 50th anniversary brings the work closest to its author’s intentions. A Clockwork Orange is as brilliant, transgressive, and influential as when it was published fifty years ago. A nightmare vision of the future told in its own fantastically inventive lexicon, it has since become a classic of modern literature and the basis for Stanley Kubrick’s once-banned film, whose recent reissue has brought this revolutionary tale on modern civilization to an even wider audience. Andrew Biswell, PhD, director of the International Burgess Foundation, has taken a close look at the three varying published editions alongside the original typescript to recreate the novel as Anthony Burgess envisioned it. We publish this landmark edition with its original British cover and six of Burgess’s own illustrations.

Grab your Ultraviolence print and a pint of milk, and have a good read for $16 here.