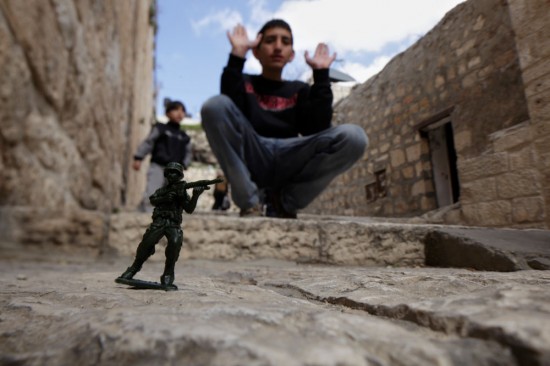 When Brian McCarty wasn’t ready to leave toys behind, he began an unconventional and lauded career as a toy art photographer. After about two decades of shooting toys, McCarty was ready for a new challenge. The WAR TOYS project had its genesis back in 1996 when McCarty worked on the first major photographic exhibition in Zagreb after the Croatian War of Independence. There, he explored “war toys” as cultural artifacts and tools for gaining perspective on human conflict. He now continues this survey using toy photography and principles of play and art therapy to shed light on the latest generation of Israelis and Palestinians; one which has never known an existence without the constant threat of rocket attacks, air strikes, gunfire, explosions and incursions.

Above, you are seeing the Proof of Concept. Completed in early 2011, Brian spent approximately four weeks in Israel, Gaza and the West Bank focusing on one humanitarian organization and a small group of children under their care. The WAR TOYS project team is heading into the final stages of the project:

Tentatively scheduled to begin in Fall 2011, Brian and the full production will return to Israel, Gaza, and the West Bank to complete the photo series and documentary film. Over the course of approximately 12 weeks, hundreds of hours of footage will be filmed and no less than 30-50 toy setups will be photographed. Editing and post-production will last 18-20 weeks, resulting in a feature length documentary film and a photo essay consisting of 15-30 images.

Very cool stuff here. Will this be a 2012 Kickstarter project? Keep tabs on the WAR TOYS project through the blog.