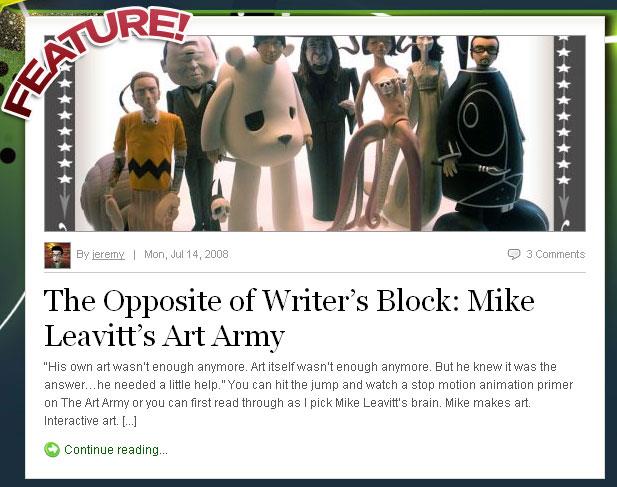 Mike Leavitt was one of the first artists I interviewed at ToyCyte. 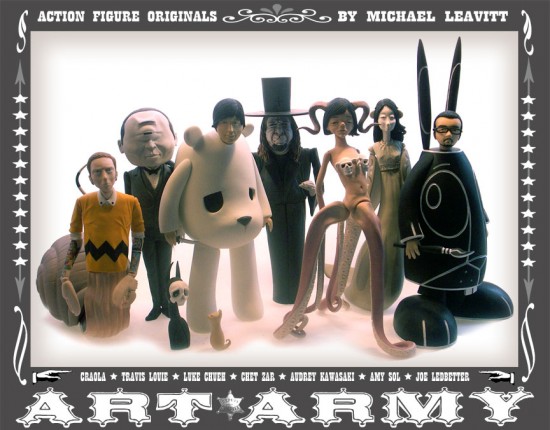 “His own art wasn’t enough anymore. Art itself wasn’t enough anymore. But he knew it was the answer…he needed a little help.” You can hit the jump and watch a stop motion animation primer on The Art Army or you can first read through as I pick Mike Leavitt’s brain. Mike makes art. Interactive art. ArtCards. Art figures. He probably made some art in the time it took me to write this paragraph. Here’s a conversation we had about The Art Army. 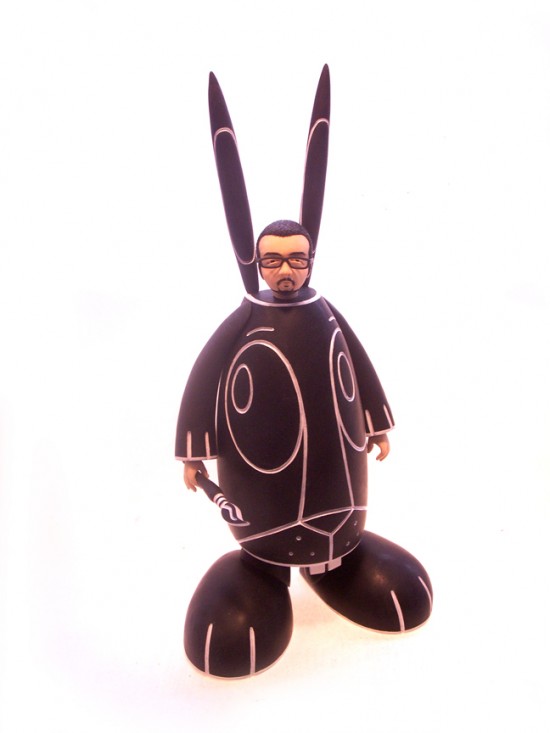 JEREMY BRAUTMAN: What made you combine action figures with urban/pop artists?

MIKE LEAVITT: I’ve always been consumed with the differences between mainstream product and art. The Art Army came from ArtCards; since my sketchbooks were piling higher than a body of concrete work, I figured I’d make the ideas the art itself. The thorn in my side for nostalgia and corporate product made me lean on the baseball card format. I could reproduce my sketches, categorize art, and study my options visually like flash cards. It could’ve been writer’s block, but I had the opposite.

The ArtCards became self-sufficient enough to pose the question, “why not make them 3D…into action figures?” It was a no-brainer to turn the collectible 2D portraits into collectible 3D portraits, with basically the exact same subject matter. 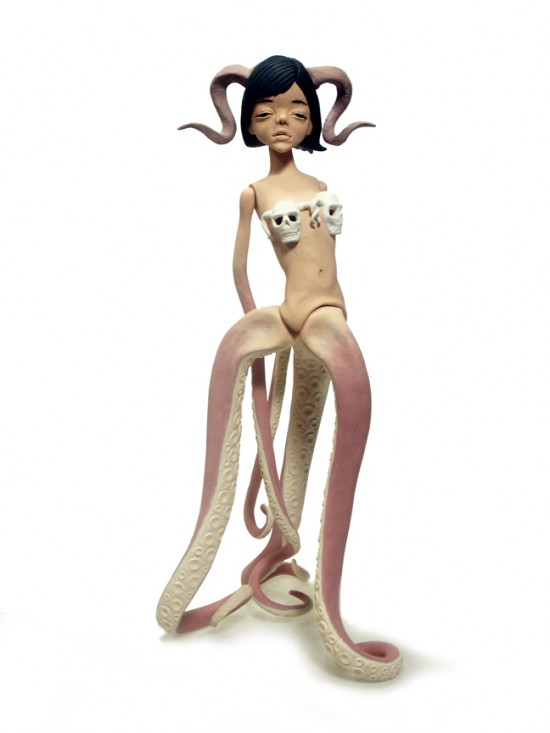 JB: How does a particular person get drafted into The Art Army?

ML: The biggest factor is my love for a particular artist. When I got started on the project in 2003, I had no clue about “urban vinyl” or Juxtapoz Magazine. I thought The Art Army was more conceptual art than anything “urban” or “low brow”. As my project matured, the underground art movement had already gained crazy steam. The more The Art Army got tied to “art toys”, the more I was enamored with this amazing new field of still-living, uber-talented, badass artists that generated an entirely new wave of to-do lists.

But there’s also politics. Along with the personal angle, I’m trying to assemble some sort of all-time all-star team. I’m also a do-gooder sensitive to the amount of women and non-white artists I’m representing. And then there’s the design and aesthetics of who would make a visually striking action figure. And then there’s the capitalist reality of who would sell. It’s a mad matrix I run every name through.

JB: Can you tell me a bit about your process? What goes on? How long does it take?

ML: I sculpt multiple body parts with polymer clay (Fimo, Sculpey), cook the parts to harden separately, and assemble them with internal elastic cords–usually 3 cords for the arms, torso and legs. Making body parts fit together tight and articulate particular positions is relatively simple by molding uncooked soft clay onto a hardened, cooked piece. Before assembly and after the pieces are cooked hard, I sand all surfaces smooth and sharpen any details with an x-acto to finish the clay up to production-quality level. I paint some details, but 95% of the color is from mixing the colored clay itself. I use paint for certain modeled textures and tiny details like tattoos or clothing logos. The working time is one of those magician’s secrets…depending on size and complexity, it ranges from about 3 days on up to 2 weeks per figure.

JB: You’ve limited each figure edition to 10 and multiples are based on demand. Which figures have been the most popular? Have any been retired so far?

ML: Van Gogh, Mark Ryden, and Andy Warhol have been the most popular. There’s 6 or 7 of each. I’ve made about 4 each of Robert Williams, Big Daddy Roth and Dale Chihuly. Since I make each one new from scratch with no molds, I can vastly improve from figure to figure. I like the challenge of improving a multiple. No one’s been “retired” yet. 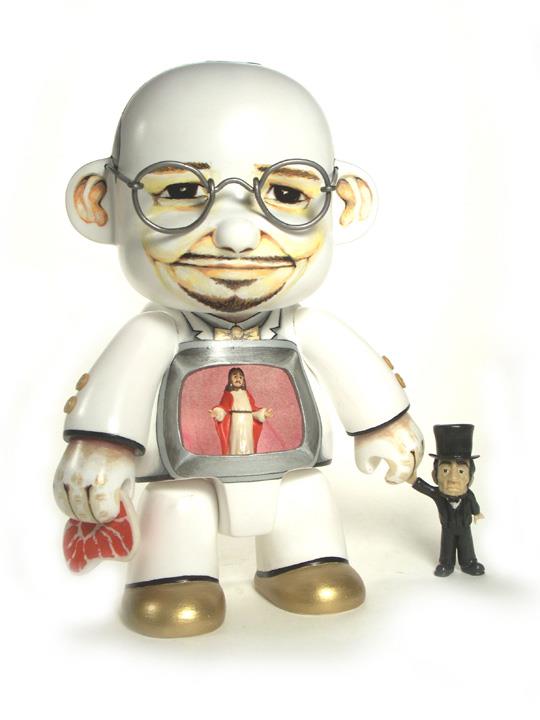 JB: I noticed you did a Mark Ryden Qee. Have you customized other platform figures?

ML: I did a Keith Haring Living Dead Doll for ToyTokyo’s 2006 Halloween show [on YouTube here]. I did one of the Big Daddy Roth estate’s limited run of 12-inch fiberglass Rat Fink’s for a customized group show and book production. I like the challenge of the platforms, especially since it’s become popular to customize them. You have do something original to differentiate. I try to sculpt and add-on as much as possible to change the overall form. 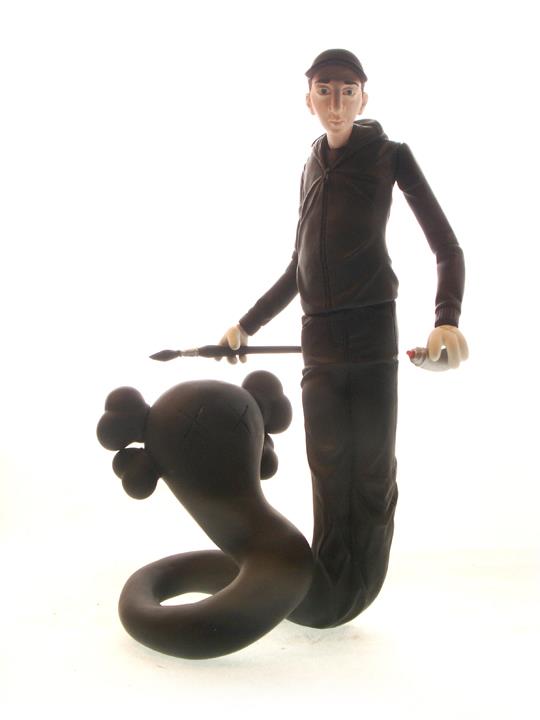 JB: Your figures are all meticulously hand-sculpted in your studio. [Click here for an interactive 3D studio tour.] Have you ever thought of doing a production run of The Art Army?

ML: It’s always on my mind. The bottom line is money. I don’t have the capital to invest in high quality molds, and I doubt I have the name recognition yet. In order to see enough profit from royalties, my own sales of limited editions, or even a well-contracted distribution plan, I’d need to be selling tons of product. I’m not opposed to production at all, but I’m not convinced that it’s the right time for me yet. If I end up making a serious chunk of change, I have the time to make it all work right, and I get the feeling there’s enough interest in my work to actually sell the product, I’m pretty sure it’ll happen at some point in the future. 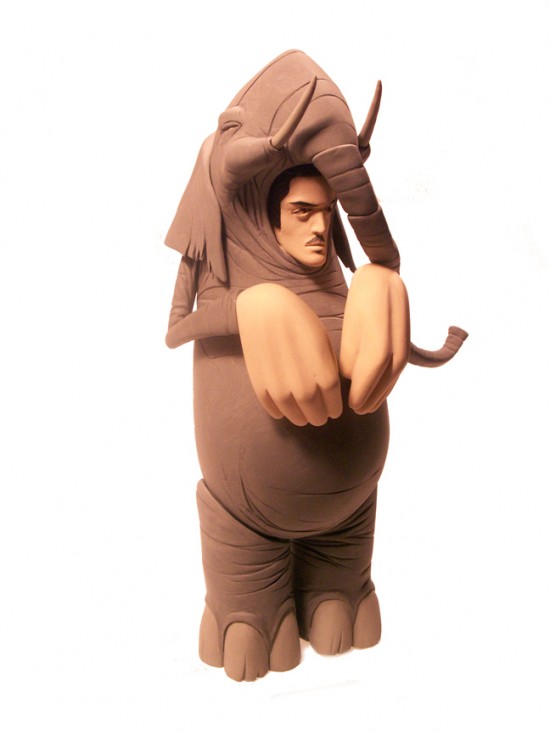 JB: Stolen Space has one of your Banksy figures in their permanent collection. Gallery 1988 has one of your Ledbetters. Who is the “typical” collector of The Art Army? (For instance, if you made a figure of me, my mother would want to buy it.)

ML: Like your Mom, I get a lot of custom commissions from people who don’t know a single name on The Art Army list. [Ed note: My Mom knows Warhol and Basquiat!] I also get a lot of serious designer toy collectors or “fan” collectors who can either afford my relatively high prices, or can add an odd action figure to an already-established art collection (like the gallery people who’ll occasionally pick up a figure). I don’t get many casual buyers looking to add something to match their couch.

Most artists aren’t self-loving enough to buy themselves (I think only 2 have). There’s actually some unintended voodoo that freaks them out when they see their figure in person. I wish the work could be affordable for more people, but I put so much time into each piece that pricing is always a struggle. Since they look like toys, people sometimes can’t justify my prices even though I put more labor into my work than a lot of artists who get paid a lot more than me. I do a lot of direct business interactions, and I usually enjoy a process that seems more like a friendship than a transaction. 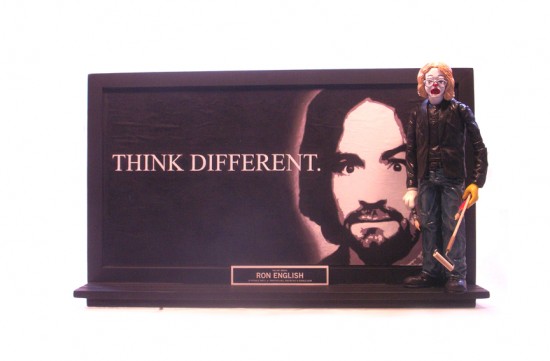 JB: You started working on The Art Army shortly after the United States declared war on Afghanistan and Iraq, and you have written about some of your views. To what extent did the events following 9/11 inform the creation of The Art Army?

ML: Right after the planes hit, I was intensely sad for the amount of death that day. My immediate second thought was with the violent and revenge-filled mindset of the U.S. government, instantly foreseeing an endless chase after uncatchable terrorists. BUT…this didn’t create the project; it only cemented the name. I was already enamored with the thought of artists worldwide banding together to “take over” with everything but killing. The name might’ve stayed even if not for post-9/11, but it wouldn’t have resonated as deeply. I still feel obliged to “help” when I can and not fear the politics, but I also want to keep it fun and humorous. “The Art Army” may only be funny because it’s a myth that’ll never happen, but the concept is strong in the current context of the world. Art tends to cut across normal political lines. The subject matter may lean a little left, but the business runs hard down the right. People successful with art have a firm handle on socio-economics, and artists have always enormously influenced culture, from the Renaissance to Hip Hop. It might just be a corporation if it ever officially happened in an organized way, but there is some grit to the idea of a real life “Art Army”. 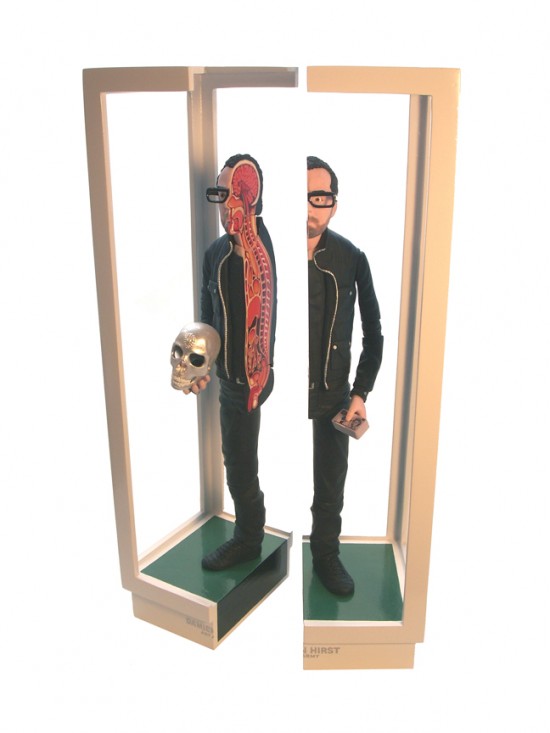 JB: Who have been your five favorite figures? Five hardest?

ML: I’ll give you 3: Andy Warhol 39-inch (in wood, the biggest one), Mark Ryden 21-inch (also wood, second biggest), Damien Hirst (the most recent Art Army draftee). My favorites are the recent ones I spent the most time on, which were basically the hardest. The newest Damien Hirst was a real bitch- sculpting, painting detail, and assembling a figure in two halves split perfectly down the middle. It messed with my mind. The big wood figures are also a serious challenge. I love it when my mind gets bent by engineering problems. 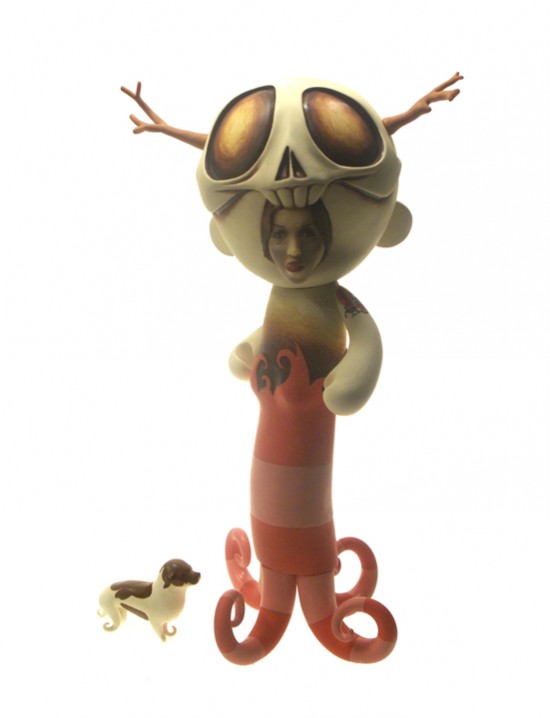 ML: Obama is for sure as my love runs deep. It’s a matter of timing. I’d want to sculpt and auction him at a high enough price that I could donate a chunk to the campaign, and at a time when any possible PR from the figure would be effective. I won’t give away too much of a to-do list publicly so as not to set up expectations. I’m doing tons of commissions for wedding cake topper figures, and just goofy custom figures. Right now I’m working on one of my best friends, Ben, who’s commissioning himself as Dr. Phil. You only really get it when you meet Ben in person, but I like doing off the wall little pieces like that. The sculpture itself becomes more prominent when the subject is lesser known. 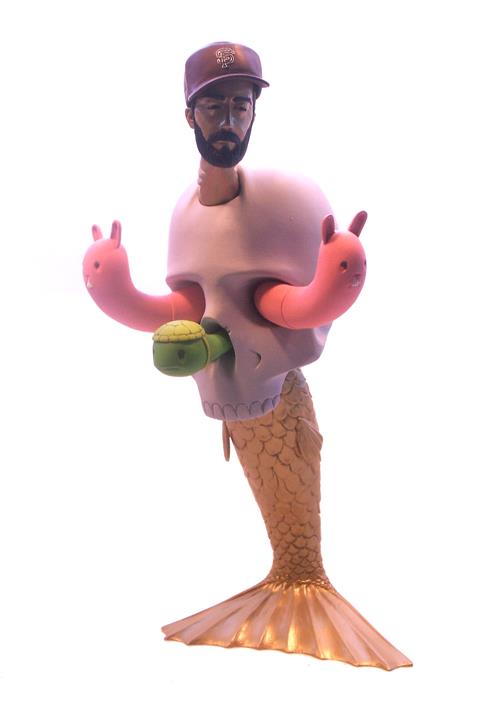 JB: ToyCyte is a website dedicated to the culture of collecting toys. What do you collect?

ML: If I wasn’t so poor I would’ve already pieced together the best of my old 5 3/4″ G.I. Joe’s. I’m desperate for the hooded Zartan with mask & color-changing armor…first Snake Eyes, Chuckles, Shipwreck, The Fridge, first two Cobra Commanders, etc. I pick up the cheap $5 designer toys when I can, anything Ledbetter or Biskup. I get one of those articulating new Marvel figures once in a while. I’m also in dire need of a Boba Fett to fill out the best of my vintage Star Wars figures. I love that little scale and silly “stiffness” to those figures (I have a major soft spot for Marvel Secret Wars for the same exact reasons). I love pretty much anything in that golden age of small-scale action figures in the mid/late ’80’s- Smurfs, He-Man, Transformers, A-Team, Indiana Jones, Clash of the Titans, Karate Kid. We may have gotten the short end of the video game stick, but I’m pretty sure action figures will never be as good.

JB: I don’t know Mike, you’ll have to take that one up with Pitfall Harry.

SUPPORT THE TROOPS: This past weekend, some of the Art Army were drafted by the Roq La Rue Gallery in Seattle, WA. This coming week, other enlistees are being deployed into the Under a Red Sky group show (with Shepard Fairey) at London’s Stolen Space, while a select few will be appearing at The Hard Rock Hotel in Las Vegas. Keep clicking here for a GPS on the movement of the army. Upcoming locations include New York’s Fuse Gallery and Palm Springs’ M Modern (with Joe Ledbetter). 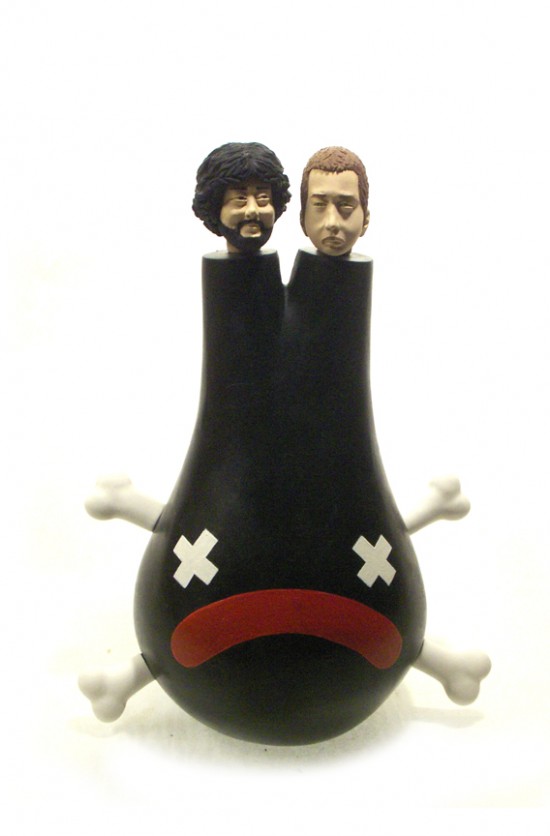