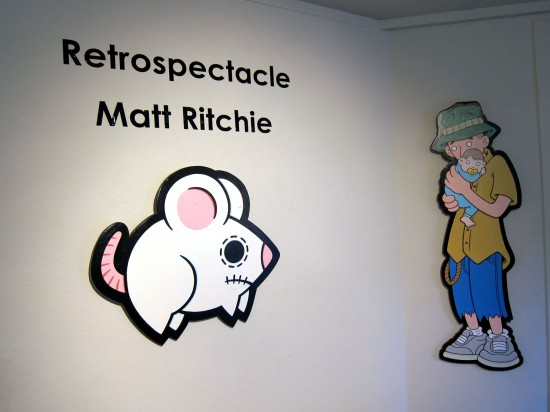 Matt Ritchie‘s Retrospectacle is an epic, yet understated, genre-defying art show open for one more weekend at the Olive Hyde Art Guild in the Bay Area city of Fremont. Perhaps you’re reading this interview on Monday and thinking: “Rats! I missed Matt’s Retrospectacle!” Good news: Matt’s rats (all 103 of them) and select other works from this show will reappear in April at Zerofriends Gallery in Oakland. And this time, they’ll be available for purchase.

Between art, life, work, and rollerskating, I caught up with Ritchie for some Matt chat. 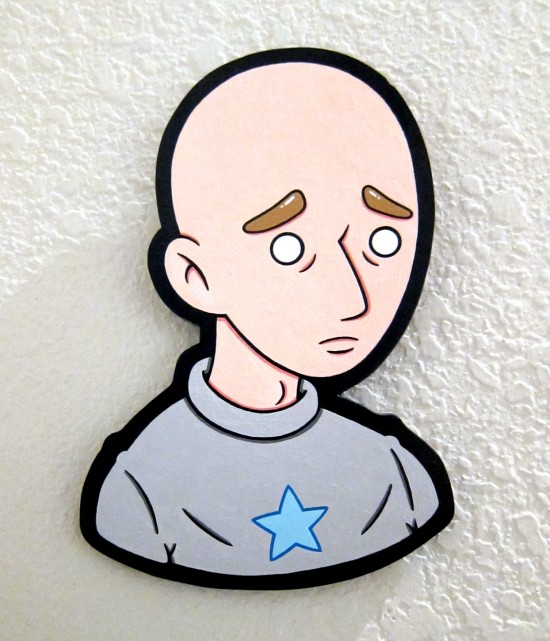 JB: When did you realize you were going to be making art for the rest of your life? 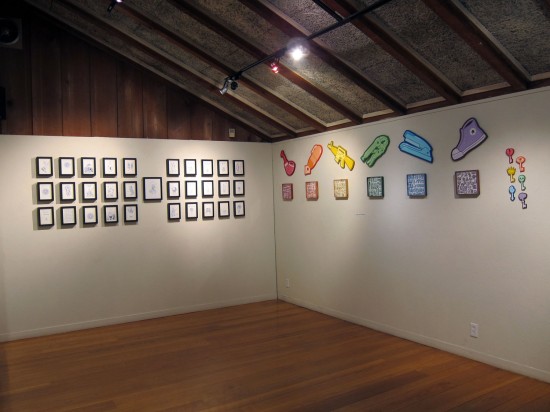 What inspired you back then, and did you have any mentors?

In the mid-late 70s, I was enthralled with sci-fi culture. My earliest drawings were inspired by Star Wars, Battlestar Galactica and comic books. Later, in the early 80s, I became interested in Dungeons and Dragons companion books like the Monster Manual, the Fiend Folio, and Deities and Demi Gods. I didn’t really play D&D, but I loved the illustrations in the books. Around that time, I started to indulge in nature drawing, and then in high school, I got into all the famous old artists. I found my first real mentor studying art at Cal State Hayward under master printmaker and painter, Enrique Chagoya. Enrique is an insurmountable artist whose talent for art is matched only by his talent as a teacher. Enrique still shows work worldwide, and he currently teaches at Stanford University. These days, my inspiration comes from years of acquired interests, as well as from my peers with whom I create and show art. Oh, and I have always listened to music all day, every day. I can assume that I’m heavily influenced by music too. 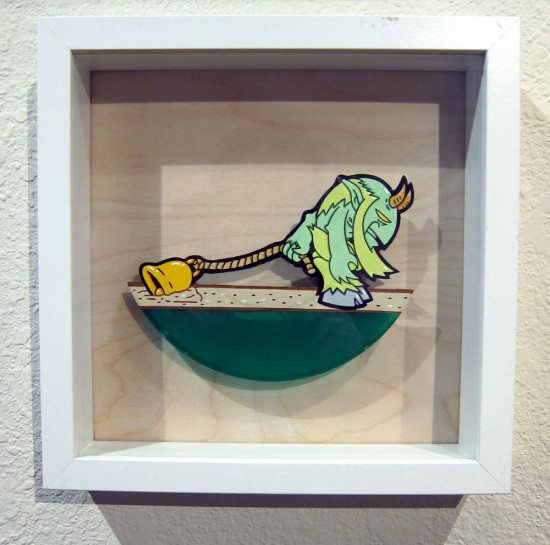 What period of time is covered in Retrospectacle?

The oldest work in Retrospectacle is about 10 years old, and I finished the newest pieces on the day we hung the show. A majority of the work you see in Retrospectacle is less than 2 years old. I kept a lot of work at home because it didn’t fit the themes and flow of the show, and there’s also work I sold over the years that would have rounded out certain series if I’d still had those pieces in my collection. The 103 rat pieces in the main gallery are being shown in the Retrospectacle show for the first time. 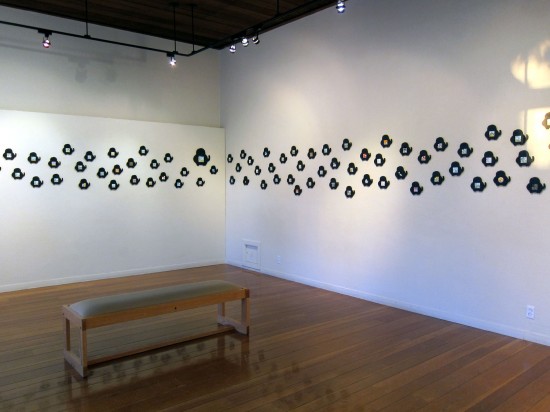 What’s the longest period of time you’ve gone without making something?

I think in the last 35 years, I haven’t gone more than about 3-4 days without working. 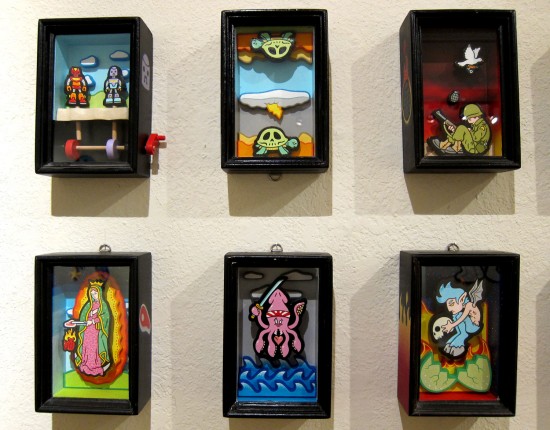 You’ve called yourself ‘compulsive.’ Could you try to describe what happens from the moment an idea pops into your head through when you’re reaching for the saw or the pen…?

I never have a lack of ideas; the challenge is more about how to get the most out of my ideas. I like to improvise and build on ideas as I’m developing the work. The physical process of my work is so demanding that a lot of time is spent between the conception of the idea and finishing of the piece(s). During that time, I either quietly psychologically torture myself or improvise elements of the work as I go. 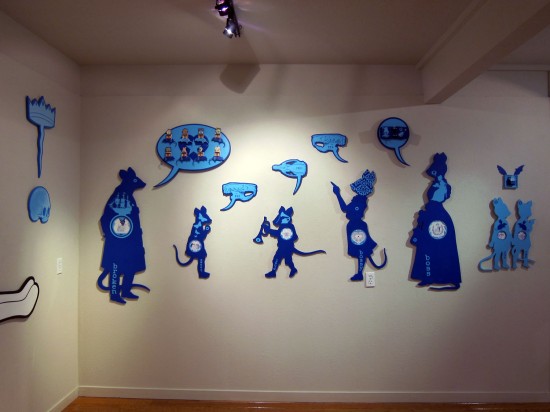 How do you find/make the time to be so prolific?

I have a very self abusive work ethic. The way I work is exceptionally unhealthy: I’m neglectful of eating, socializing and especially sleep. I work at every available moment that my life affords me. 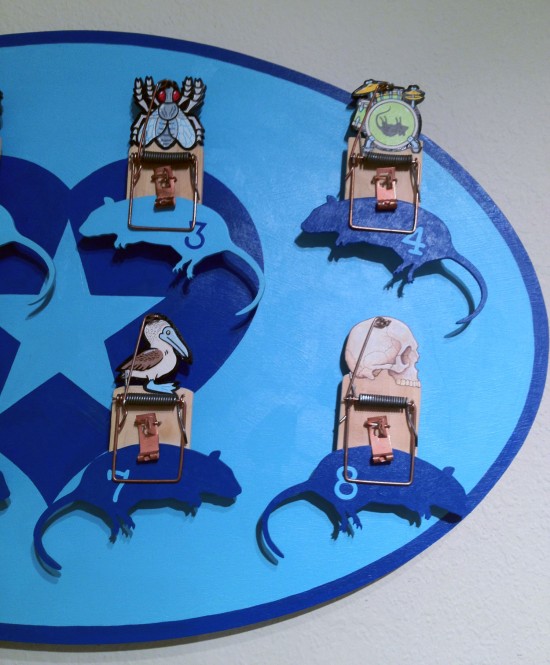 When you’re working, do you sketch out ideas or figure them out as you go along?

I never sketch any more: everything I start becomes a finished final piece. I think it’s one of the reasons I work in series a lot. Sometimes, I think I should sketch more or do more studies or be more of a student of art, but I also think I just have a system that works for me. 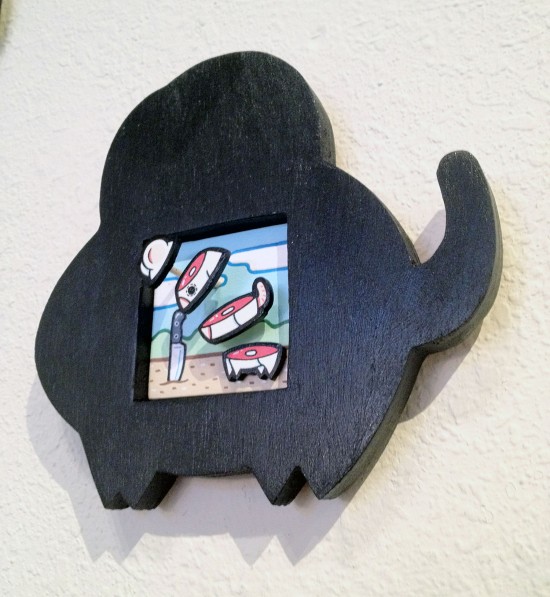 Most people (in America) think bigger is better. Why do you like working small-scale?

I like extremes of scale. Psychology has been the dominant theme of my work in the last few years. I use scale to reinforce the themes in my work; sometimes a big piece is necessary and sometimes several smaller pieces. 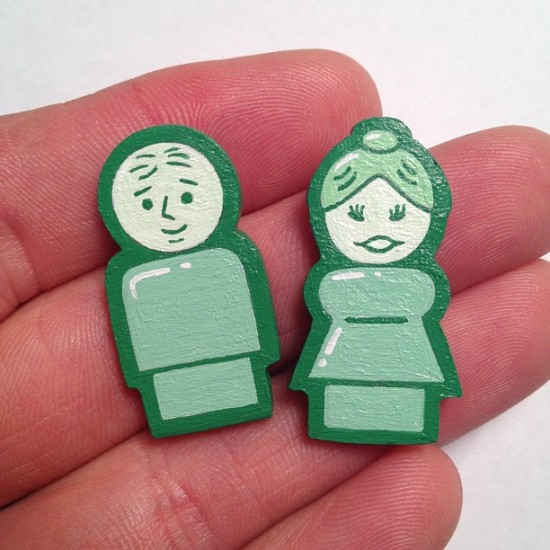 I think your tiny woodcut objects are amazing. What have been your Top 10 most deeply satisfying and/or pleasurable little objects to make?

A lot of your work has so many layers (actual and contextual). Do you struggle with calling things ‘complete’ because there’s more story to tell or are you zen about picking things up and building back onto them? 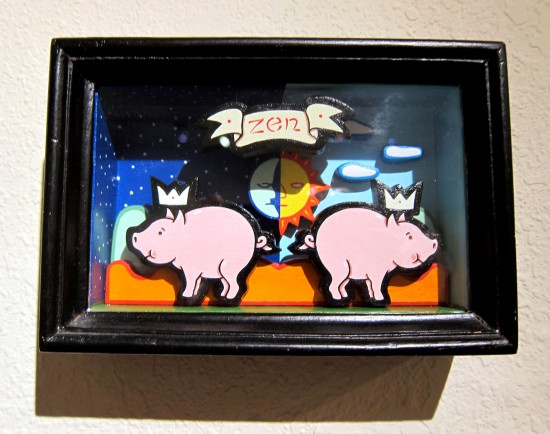 I believe that my works are complete for the most part when they’re finished…though I’ve been known to jump back into a series to add more to the theme. 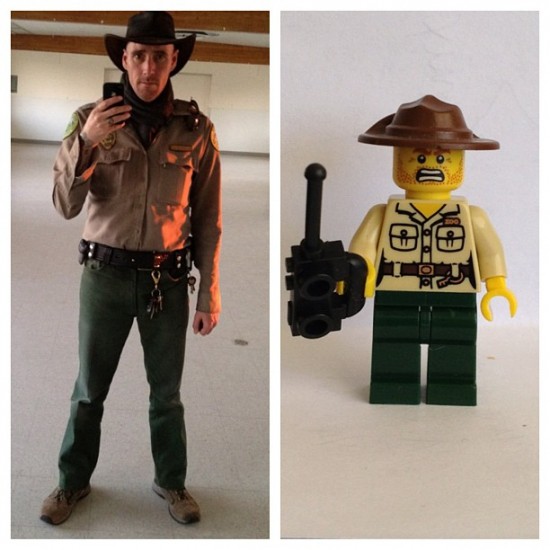 During your day job as a park ranger, how do you keep track of your ideas?

At work, I file and sort through ideas. I add and subtract from pieces and concepts in my mind. I doodle things or draw complete pieces. But most of all, I benefit from taking my mind off of my art entirely. 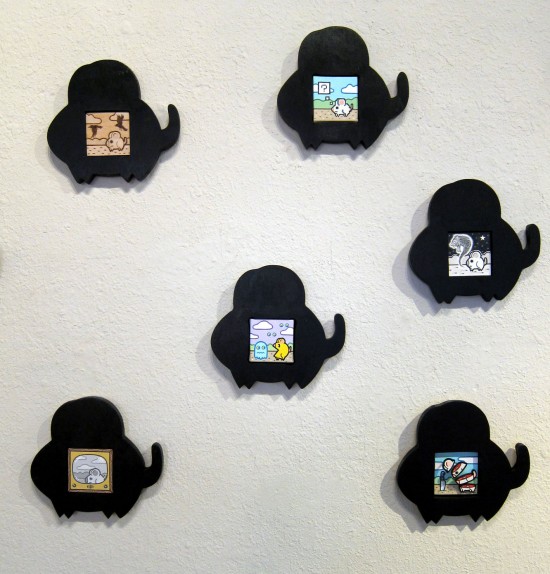 I heard you’re into family rollerskating…?

What you think of when you think of rollerskating is entirely wrong when applied to what we do. People usually say they’ve never seen anything like it when they see it. It’s not ice skate style or derby. The tradition of skating we do is called JB skating. It originated in Chicago and spread to the Midwest and down south. I can’t describe it. You just gotta look up “JB skating” on YouTube or come out with us to see what I mean. 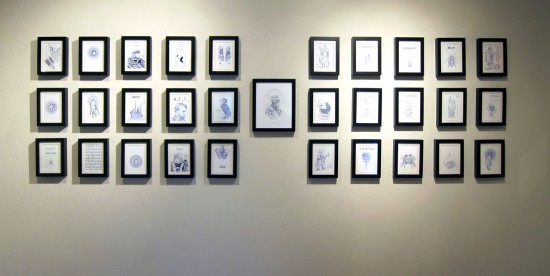 What are your thoughts on the benefits of being a lone artist vs. having a crew?

I never thought of this. I work alone often, but I also work with a bunch of other artists. I guess I benefit from both.

Why does it seem like it’s not very easy to purchase or collect your work?!

What are you working on right now?

Right now, I’m finishing some pieces for my rat136 show at Zerofriends in April. I’m also in about 6-7 group shows until another solo show with all new work at Zerofriends in September. And I’m rounding out my year with a 2-person printmaking show with my good friend, the amazing Jon Way$hak. 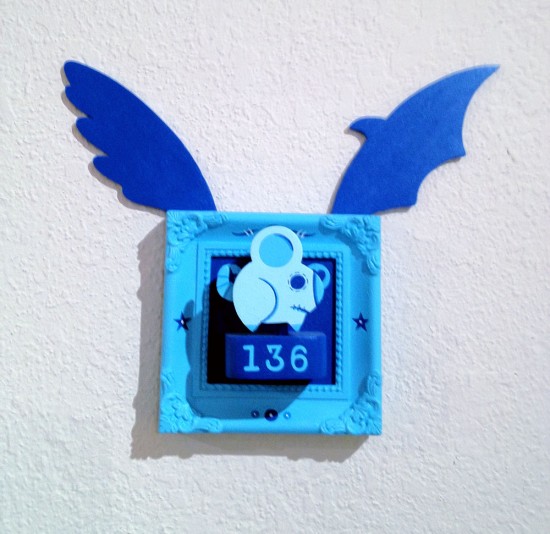