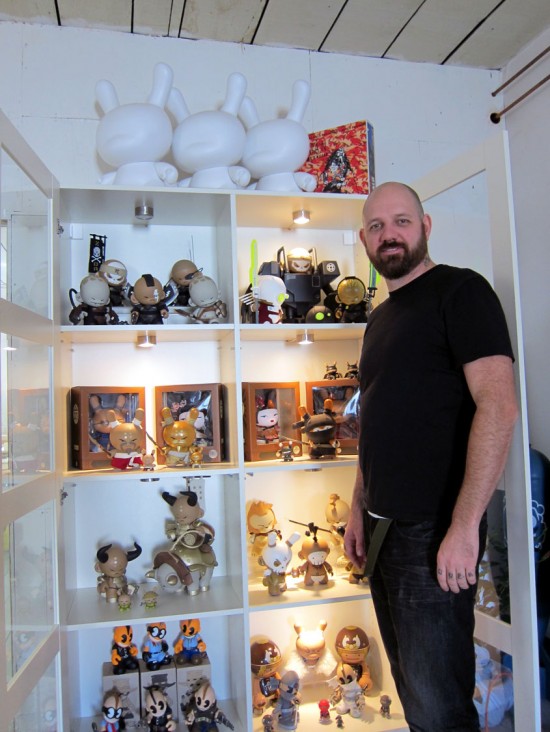 Last week, Vannen Watches sent me over to Huck Gee‘s San Francisco studio to ask him tons of questions about time. Much like his watch, which debuts tomorrow, he killed it. To find out where Huck would go if he could time travel, check out the first half of the interview at the stroke of noon here. For a peek inside Huck’s studio and his brain, read on. 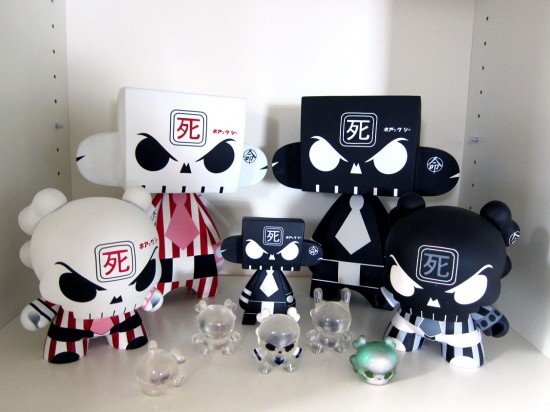 It was a great exercise to ruminate almost exclusively on the topic of time for Vannen. Almost exclusively. After getting a tour of Huck’s studio, I snuck in a few questions about other curiosities. 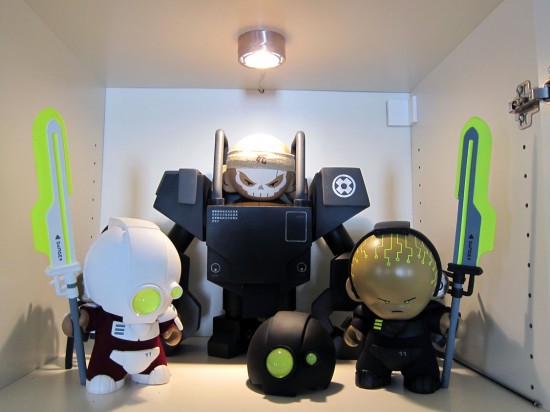 Actually, this query’s about time and general curiosities: How much time did it take Huck and his crew to create the run of Sgt. Vasquez Bruiser mechas shown in the back of this cube? 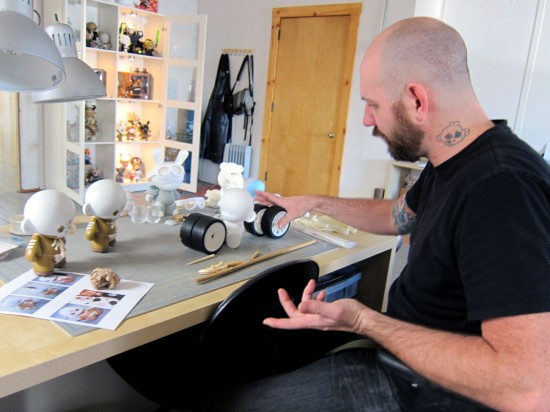 About two months. I know what you’re wondering. And, man, this one also goes back to time. When you’re making mecha-suited vinyl toys, does it really feel like two months? 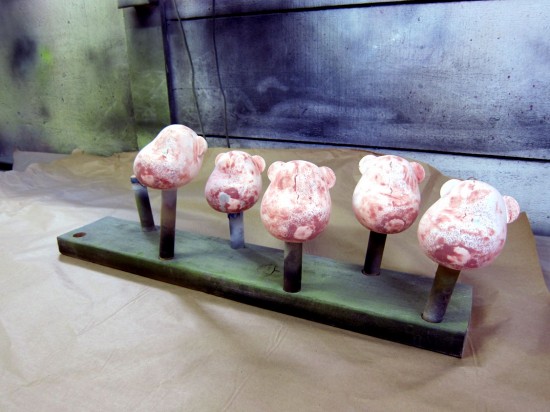 Huck spoke about something with which I, too, am familiar: “It’s strange, my hobby became my career,” he said. “So there’s a weird dynamic where what I used to really enjoy doing to have fun is now my work.” I really understand that dynamic. 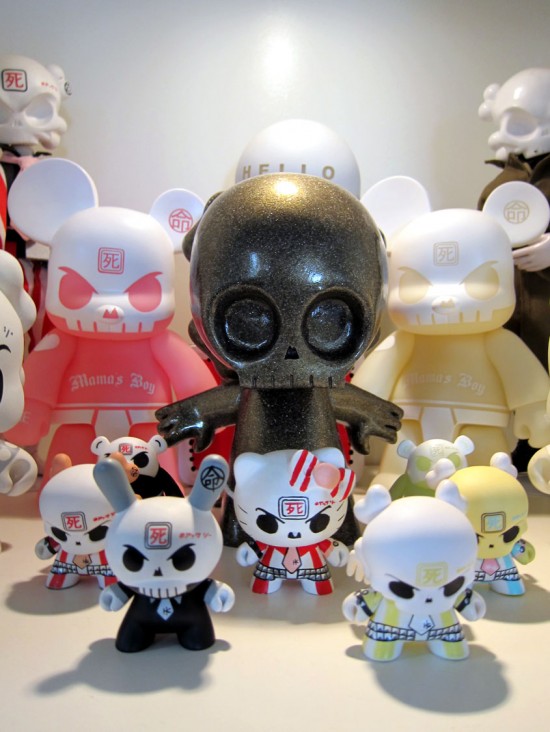 Looking around his studio, it’s clear he’s a very prolific toy artist. I asked him how he felt about making art vs. making product.

I wish I could create art more. I would much rather sit here and create what I want to create for the sake of creating. I have ideas that I really want to make, but I know nobody would want to buy it. I have to think about that. There’s a certain level of merchandising within everything. I would much rather make art, but I’m happy with what I’m making. 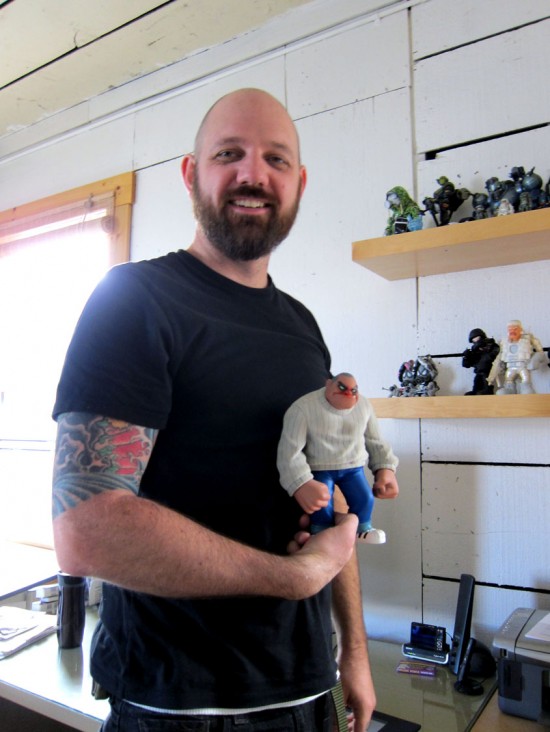 Here’s Huck with a toy he remembers standing in line for when Kidrobot first opened in San Francisco. This was obviously before he managed the then small Haight Street shop. Huck’s relationship with Kidrobot has remained steady in a decade of ups and downs for the company. He spoke to me last year about blind boxes, and he has some exciting big surprises in store for next year. 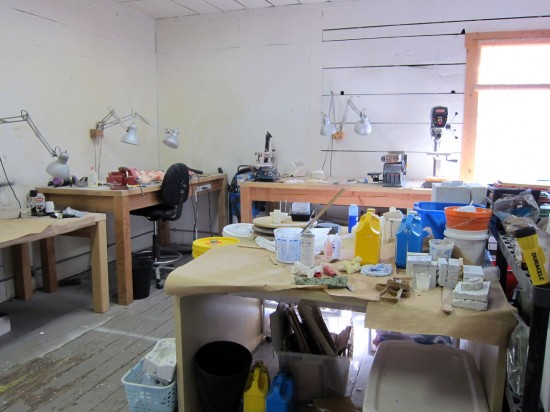 So what’s a typical day like in the life of Huck Gee? 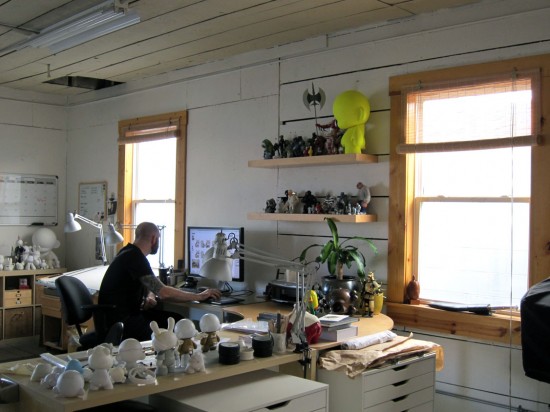 We were talking about the quality of customs that are coming out of the scene right now, and Huck said: “Sculpting and casting is the new graffiti.” I asked him to elaborate:

I’m watching these recent additions to the community like Kevin Gosselin, Josh Pierce, and Gary Seaman (to name just a few) wreck shop with their sculpting and painting skills. Making beautiful character designs. Passionately. Sharing their work amongst the community. I suppose you could compare it to any contemporary art scene but it feels very familiar to me… it reminds me of those days passing sketchbooks around, sharing your work, learning and practicing, impressing your peers… these kids are getting up… and establishing themselves as bona fide artists. 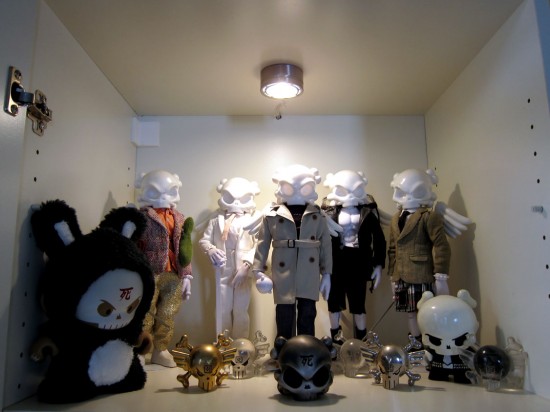 Huck was really open and forthcoming during our conversation. I wanted to know if he felt misunderstood. Ironically, my first interview with him had occurred two years ago and dealt with the taboo subject of money, something I think a lot of people misunderstand. Huck has always answered my questions, and I’d secretly suspected that perhaps he was, in fact, a nice guy. 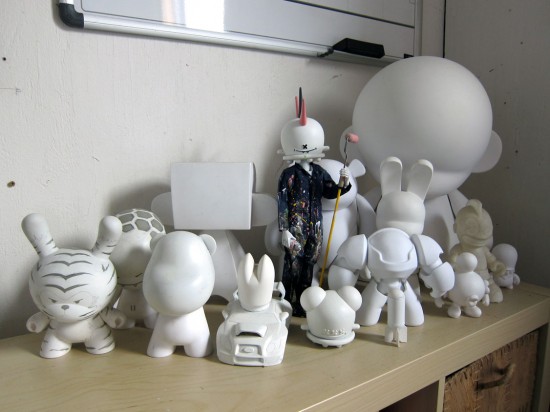 I asked: What’s the biggest misconception people have about you? Here’s what he said:

There was a discussion about me stopping people from reselling my toys. I wasn’t stopping people from reselling my toys. People were buying my toys and reselling them to my collectors, my die-hard fans who’d been trying so hard to get them–for double the price. They were only in it to make a profit. That’s fine, you can try and make your profit. But if I have the means to get my toy to my die hard fans at the price that I think it’s valued at and that I don’t feel like I’m ripping anybody off at, then I’m going to try to go that route. So I kind of threw down that if I find out you’re buying it and selling it within a week, I’m not going to sell to you anymore. That resonated to the community, and it’s been misworded and misconstrued in different ways and it came back that I’m just this big jerk, and I’m so not a jerk. 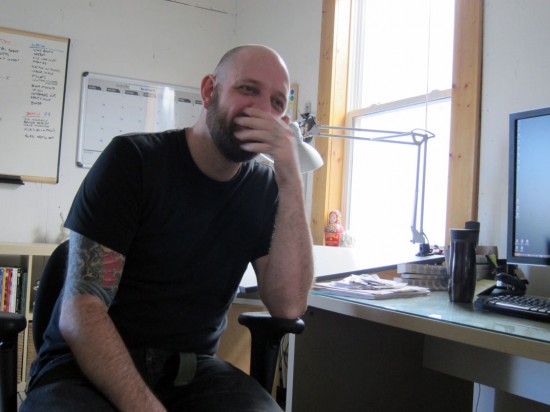 Would a jerk cover his mouth while laughing (like a Japanese schoolgirl)? I think not. I knew I wasn’t talking to a jerk. Naturally, I pressed further to test the theory. 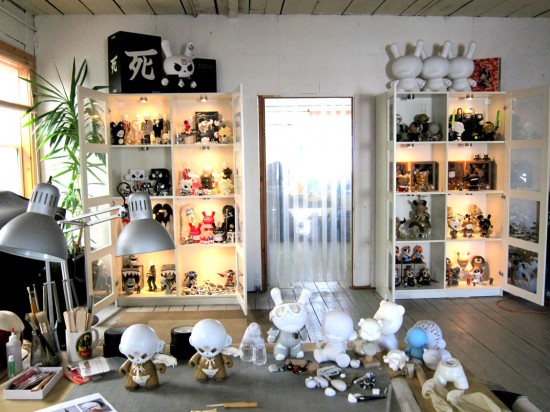 Huck brought up the point that comic book artists set the live-sketching-on-demand standard, and there are some other people who don’t like to sketch.

Huck: “I’m not a comic book artist. I know Kozik doesn’t sketch, but I think he just doesn’t want to do it.”

Me: “Kozik already has lockdown on the ‘I’m a Jerk attitude,’ though. The thing is, he’s a curmudgeon, but he’s really quite nice. Since he has the public persona of being a jerk, it would be disappointing if he was like, ‘Sure I’ll sketch.’ Maybe you have to cultivate your jerkiness.” 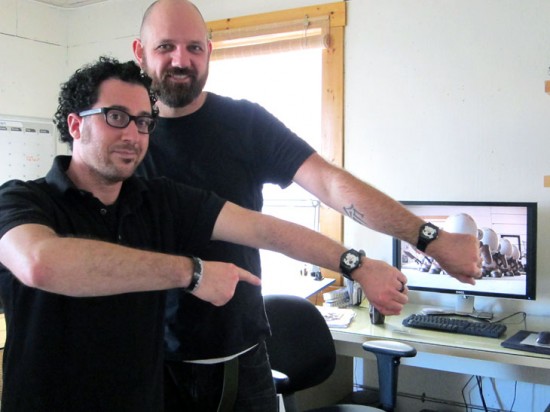 We both decided that cultivating an aura of jerkiness was not a good option, and that I’d write a story that told the truth instead. I’ll leave you with this teaser from Huck himself on the subject of what’s in the pipeline for next year:

Thanks to Huck for being a good sport. Check out the watch that all the hip peeps are digging, and look for Huck’s next appearance in LOVE MOVEMENT.