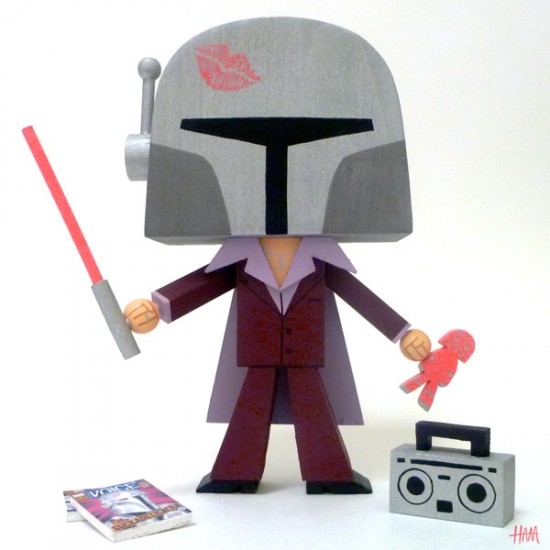 When The Sucklord got voted off the Work of Art island last week (well, really over the course of an epic trilogy), the People of the Internet had already declared him the Winner. Comedian Ricky Gervais voiced his support for The Sucklord (re-tweeted by 36 people), and even the seemingly chilly China Chow appeared to be genuinely sad to see him go. After the credits rolled, Morgan took to Flickr to bare himself with a Jerk of Art figure. That Risky Business-esque resin is now sold out, but today, toy designer and Sucklord fan, Gary Ham has revealed a Sucklord figure of his own. 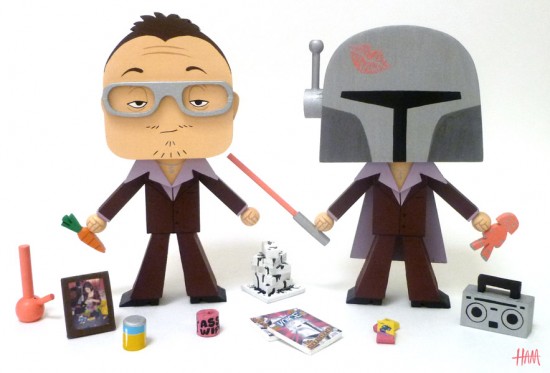 Like the Jerk of Art figure, Ham’s homage also unmasks The Sucklord to reveal the Morgan underneath. However, thankfully, Gary chose to cloak him in the suit made (in)famous through Work of Art professional photography. The well-dressed and amply accessorized Sucklord toy set was hand-made with wood and then meticulously hand-painted. Similar to The Sucklord’s crowd-sourced pricing for his recent toy releases at NYCC and DCON, Ham has opted to let YOU decide the cost of his SUCKset. The figure went live on eBay mere moments ago, with a starting bid of just $50. Won’t you be a good SL minion and do his bidding here? 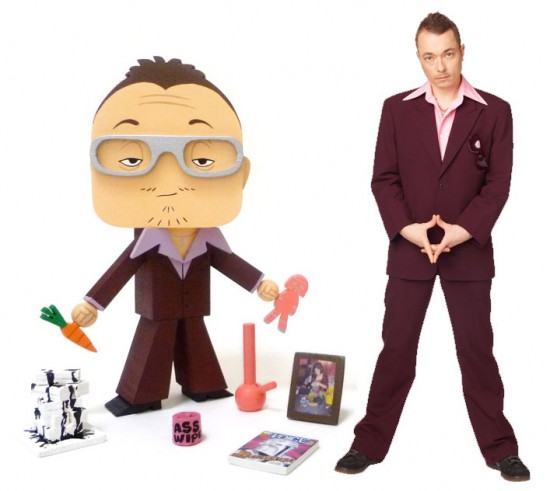 I gotta say, Ham nailed it by going with a simple facial expression and then getting all meta on the accessories. The figure comes with interchangeable Sucklord and Morgan Phillips heads, 1 body, 1 lightsaber, 1 boombox, 1 roll of Ass Wipe, 1 carrot, 1 photo of his girlfriend @needleknocker, 1 New York Times challenge piece from Work of Art, 1 jar of urine from VH1’s Can’t Get a Date, 1 Village Voice coverstory, 2 Suckpax, 1 bong, 1 bootleg Gay Stormtrooper, 1 cape and 1 body. There’s even a little surprise shout-out to the Street Art challenge…I caught up with Gary to ask him the question on all of our minds: WHY? 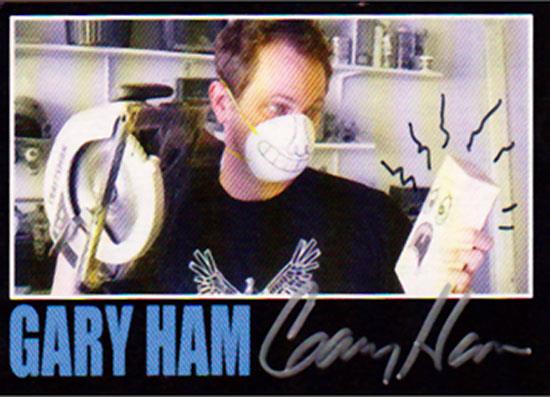 JB: What precisely inspired you to spend time in your cold garage chopping wood into the effigy of The Sucklord?

GH: He really grew on me while watching Work of Art and the recent Suckathon. I just felt compelled to make a toy of him and one that actually resembled him. You saw the Morgan Phillips toy he made right? The message and packaging were awesome, but the figure sucked balls.

JB: The Sucklord’s medium of choice is typically resin. You often use wood. Why was wood appropriate for this figure?

GH: One thing I learned from the Suckathon was that The Sucklord seems obsessed with knowing people’s cock size. I felt it was my place to step up to the challenge no one gave me and give him the 7″ of wood he wish he had. 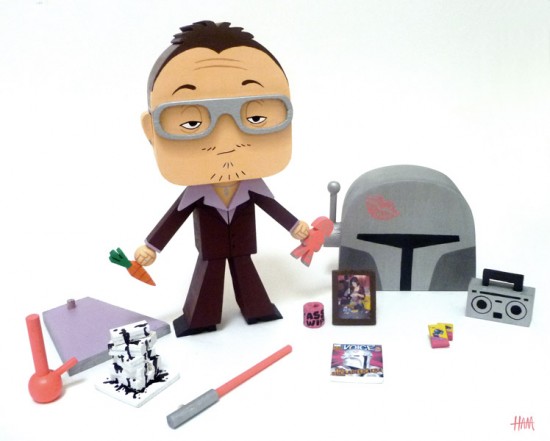 JB: Love it. I, too, am a big fan of stepping up to challenges not given to me! Can you explain the significance of some of the accessories you chose for the piece?

GH: The key to a Sucksessful toy is accessories, and The Sucklord has a plethora of things that make him the super villain that he is. The Suckpax and Gay Stormtrooper are probably what he is best known for (except for maybe his pee jar which is a throwback to his TV debut on VH1’s “Can’t Get a Date”. He loves carrots and his girlfriend, so I had to toss those in there. And then a couple things from Work of Art, like the crappy NY Times oil spill, and him appearing on the cover of the Voice. 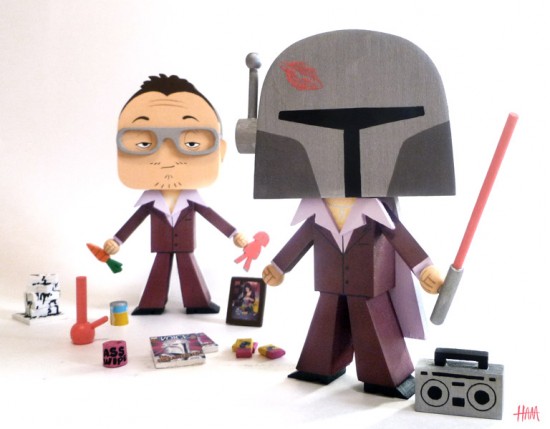 JB: Can you pinpoint what it is about The Sucklord that people find attractive (despite what should on the surface be a very polarizing personality)?

GH: It took me a long while to come around to The Sucklord’s appeal. “Fuck this and fuck that” is all I heard at first. I fought wanting to like him because I thought it was all just shtick. And that may be so, but he grew on me like a fungus, and I couldn’t resist any longer. He’s like the used car salesman you grow to like. He’s charismatic, confident, brash, direct, witty, and a brilliant marketer. I want to kick tires with this man. He’s a breath of fresh air. There is no B.S. with him. He knows who he is and doesn’t take anything too seriously.

JB: I know you’ve been watching Work of Art. What have you learned so far?

GH: To make sure I never end up on the show. If I just make a silly monkey for the fun of drawing a monkey, then the judges will gather around and discuss why he has daddy issues. I do enjoy watching the show and judging the art for myself. 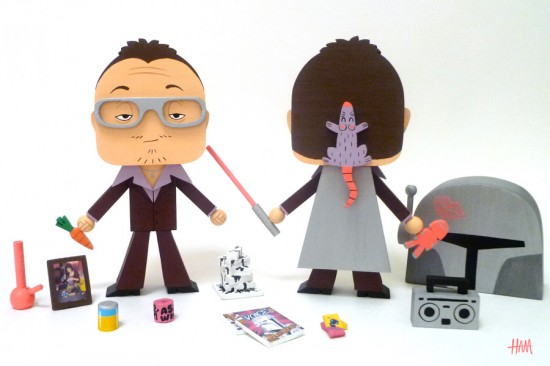 JB: The Sucklord thinks that toy art and high art should keep a distance. What do you think?

GH: I tend to agree. I’m not a museum artsy fartsy kind of guy. High art has always had a heir of superiority and pompousness about it. Toy art is meant to be fun and not taken so damn seriously. If you go to a high art show there are people dressed to the nines drinking champagne and eating fancy cheeses, but at a low brow show you might get a rootbeer and a cupcake. I much prefer pop and cupcakes.

JB: I like cheese AND cupcakes. Now please SUCK up to me by telling me your favorite Sucklord quote from SUCKtalk?

GH: “TV fucking rules, and there’s no reason to hate on it.”

JB: Word. So how can people get a hold of this piece???

GH: If there is one thing I learned from the Sucklord, it’s the art of crowdsourcing. The piece is up on Ebay now: http://cgi.ebay.com/ws/eBayISAPI.dll?ViewItem&item=180759970235 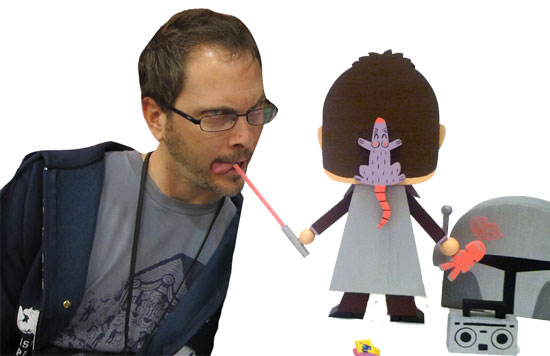