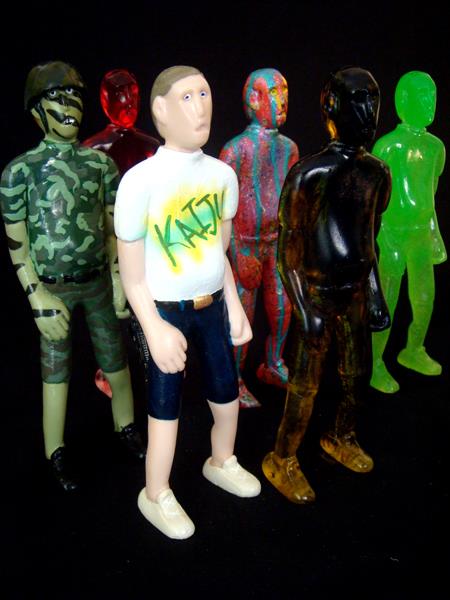 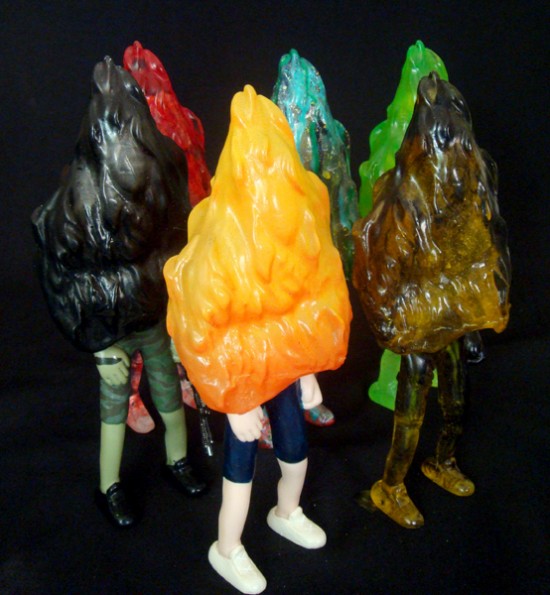 MONSTREHERO is Sean Blay and Cliff Kirschner, two guys who live in Orlando and like to make toys. They draw influence from superheroes, Japanese monsters, comics, old school action figures and the environment around them. Perusing MONSTREHERO’s Flickr, you’ll immediately notice that the duo is not afraid of color or texture. One of their signature original figures, The Victim, ranges from a sweet soda shoppe Shirley Temple colorway to the Skittle-vomit Mardi Barf variant. And Codename P.A.N.T.s exists in a seemingly infinite spectrum of finishes. I’m really blown away by the level of success they are able to achieve with their constant experimentation on figures like The Victim, Axeface, Skullmaster and P.A.N.T.s. I’m not typically the hugest kaiju fan; sometimes I look at a figure and think, who threw up on that toy? With MONSTREHERO, I eagerly await their latest images and really see the beauty in the medium. Sean and Cliff recently went on a bender and made a ton of new figures for last week’s Kaiju Monster Invasion. Any work that didn’t sell at the event will make its way to their MONSTRESHOP, where you can find custom toys. To keep tabs on what MONSTREHERO is up to, sign up for their newsletter by dropping a note to info [at] monstrehero [dot] [com]. They’ve got lots of new releases and some hush-hush store-exclusives on the horizon, not to mention some tutorials they’ll be contributing to ToyCyte in 2009. But speaking of custom toys, how would you like to get a custom Victim made to your specs by MONSTREHERO? 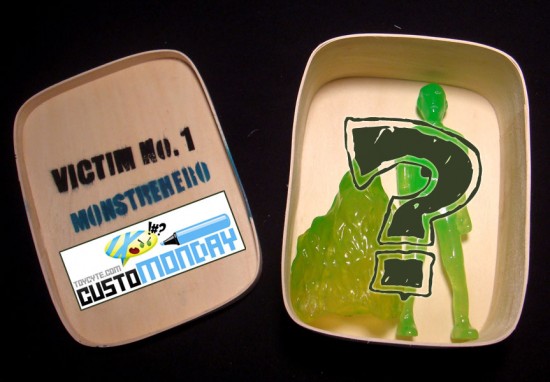 I have no idea how these guys do what they do, but here’s what they’re going to do for you: Leave a comment suggesting a new colorway for a Victim figure and they will choose one winner and actually make it for you. How cool is that? Be as creative as possible; they’re looking for a challenge and if you have a look at their stuff, you’ll see they’re up for it. Get your colorways in by Sunday at 12AM PST. We’ll announce the winner before next week’s custoMONDAY. Good luck! 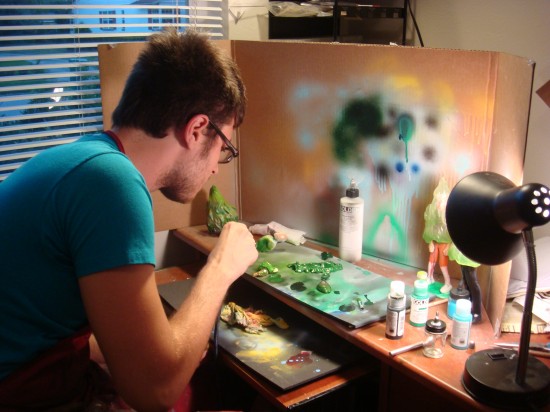 How and when did you get started making toys as MONSTREHERO?

It’s almost been exactly one year since we made our first bootleg, the Veteran. We both love toys and figured that we’d try and make our own. We bought some supplies, did a little research, and MONSTREHERO was born. The hardest part was coming up with a name. 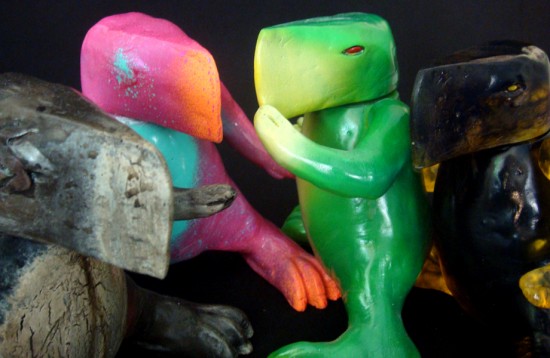 Can you tell us about your process?

We’re always sketching and coming up with weird creatures. We work independently of each other when coming up with ideas, but when we find something we like, we consult and discuss the possibilities. We then get to work sculpting. The two of us have different sculpting preferences. Sean likes wax, while Cliff likes to use Super Sculpey and Apoxie Sculpt. We concentrate on this stage the most, because if you have a crappy sculpt, not even the best paint can save it.

After we have finished a sculpt, we create a silicone mold, then cast in resin. We like to use different additives in our resin, like dyes and powdered pigments, to get interesting effects. Next begins the long and arduous process of cleaning up our castings. This is really the most time-consuming and least fun part of the entire process. But, then its saved by painting. We usually have a vague idea of what something should look like, but we leave it open to whatever fits our fancy when we get to painting. It makes it much more spontaneous and less paint-by-numbers, and it makes up for the crappy time we had cleaning up the castings. 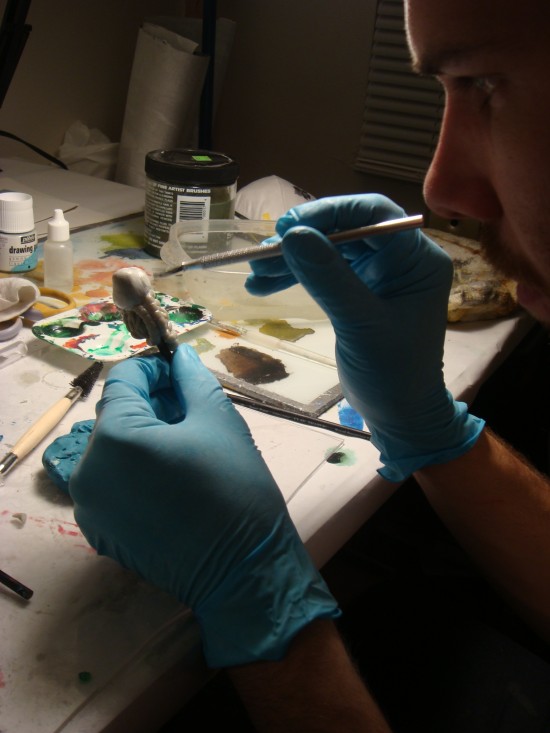 You do some of the most unique colorways and textures. What have been some of your favorites? Which ones bombed?

We try to make all of our paint jobs unique and exciting. We try not to let anything that we think isn’t up to par into the wild. A piece will get worked on until its “right”, which could take an hour, or a month. Its hard to pick a favorite, because we like everything we do, but if we have to pick, Sean’s favorite colorschemes would be the original Black Skullmaster, the Green Axeface, the new Skullsmaster Skullmaster, the large Stage 2 green and blue versions, and pretty much all of the little Pants Monstres. Cliff would have everything on his shelf if he could. 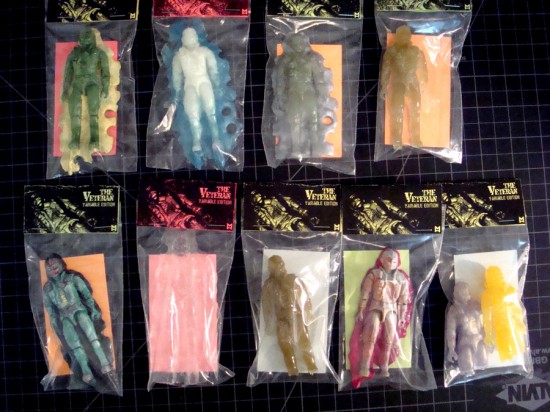 Our main influence is probably Japanese tokusatsu and their vinyl counterparts. Sean loves the superhero shows like Kamen Rider and Kikaider, while Cliff likes all the cool vinyl monsters that have come out over the years. We’re also greatly influenced by other artists like Le Merde and Lamour Supreme.
Cliff draws a lot of his influence from natural environments, hence his gritty textural paint schemes. Sean is a big fan of comics and movies, so his work tends to have bold colors and dynamic shapes.

We’re especially influenced by old school action figures, like the original Ninja Turtle line or MUSCLE toys. We try to have that big, goofy fun that you see in these old toys by having movable parts and accessories. We’re trying to bring this important part of our childhood and lives into a more fine art setting. 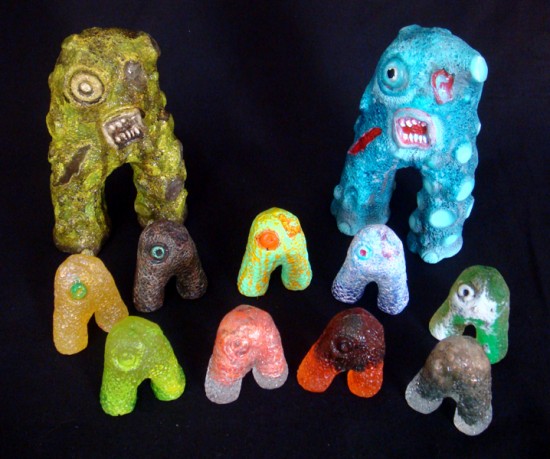 What toys do you collect?

There is definitely diversity in what we collect. We have been toy collectors our whole lives. At the moment Sean’s been enjoying Transformers, Star Wars and Japanese vinyl. Cliff prefers Japanese vinyl like Real Head, Rumble Monsters and Le Merde. We both like GI JOE, especially the new 25th anniversary line. There really is no set parameter, though, and anything that looks cool or fun usually ends up on our shelves. 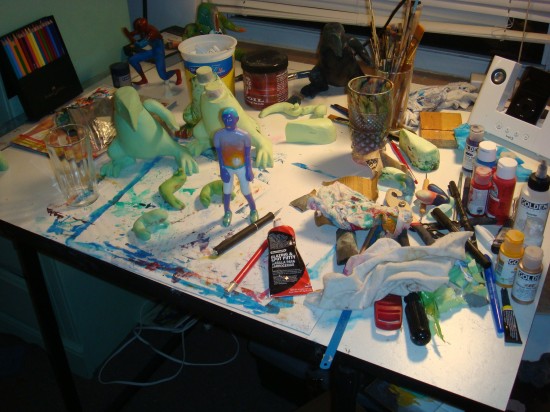 [This article was written for ToyCyte and first published on 12/8/08. I am reposting it on my own site because 1) I wrote it,  2) It’s a nice record for the artist and 3) ToyCyte is no longer online. You can download a PDF of the story, as it originally appeared (including reader comments), by clicking HERE.]