The year was 2002. The place was Tokyo. Japanorama‘s Jonathan Ross walked through a purple curtain and emerged into the toy-stocked studio of Japanese artist, Junko Mizuno. Regarding her surroundings, Junko Mizuno said it wasn’t just toys and dolls; rather it was inspiration. The translator quoted her as saying: “I wouldn’t be able to draw anything without them.” 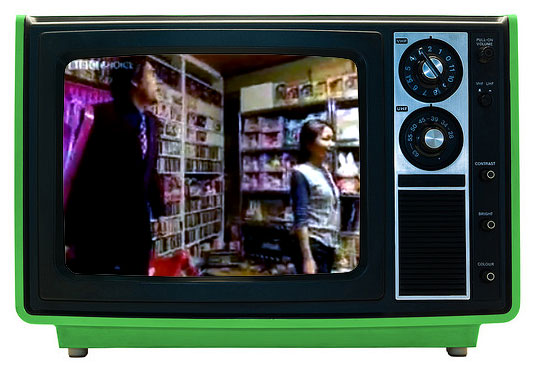 A couple months ago, Vannen Artist Watches asked me to interview Mizuno in her San Francisco studio. Of course I said yes, and I instantly began jotting down questions about inspiration and toy collecting. But when I arrived at her place, the purple curtain and the toy shelves were gone. With the exception of a couple plushes on a day bed, there were no toys in sight… 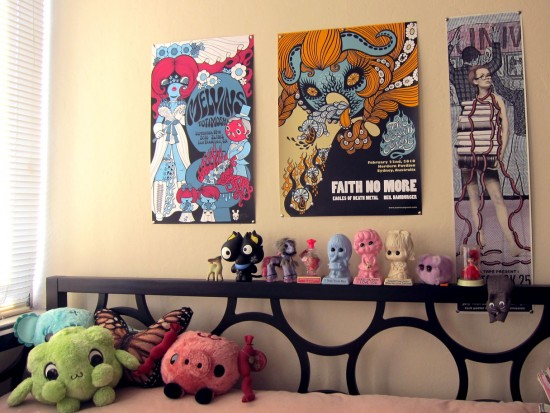 What had happened? As I fumbled around unlacing my sneakers, I made disparate inquiries about topics other than toys. Mizuno had moved to San Francisco about two years prior. She really likes cats, but travels too much to adopt one. She’s in the final stages of a picture book she’s been working on for over three years with a French publisher. She’d just finished a new Melvins poster for their Japanese tour. She casually mentioned that the Melvins happen to collect toys…

It was suddenly too much to contain, and I blurted out:

Jeremy: I was going to ask you a whole bunch of questions about your toy collection!

Junko Mizuno: I can talk about toys.

JB: Yay! [without missing a beat] When did you get into collecting?

JM: When I was very little, I used to play with toys like other normal kids. But I wasn’t a fan of fashion dolls; I was more a fan of dollhouse/playsets. I don’t know how to explain…I have a lot in my room.

[Junko disappears for a few moments and returns with two big plastic bins.] 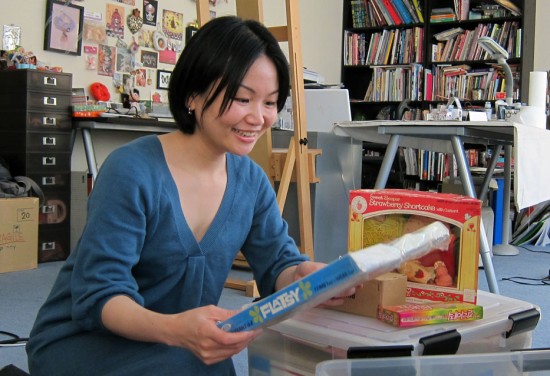 JM: I collected houses and tiny dolls. I was really into toys until I was 10 or 11. As I grew up, my mother stopped buying me toys. She got a bit worried that I was still playing with toys, so she gave them away to my cousin and other relatives.

JB: Have you since forgiven her for that?

JM: I still feel a bit angry. [laughs] After I grew up, I got on the Internet. eBay is not too big in Japan. Yahoo auctions is much bigger. I had some friends who were toy collectors and they knew these places that had deadstock toys, so we went out to find the old toys. 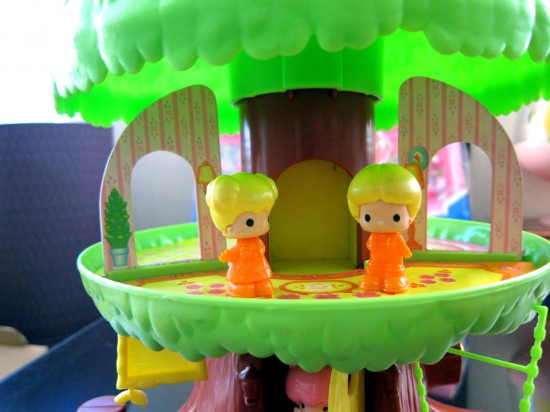 JB: What were some of your favorite toys? (Click through to find out!)

JM: I like My Little Pony. I like Polly Pockets. I collected a lot of Strawberry Shortcake. I liked toys that were dolls with a world around them…like a playhouse.

JM: They have clips on their back, so you can wear them. I love the bright colours. These are ones I discovered on the Internet after I grew up. I really like the toys from this era; they are so detailed. I can still appreciate them, and I’m almost 40. 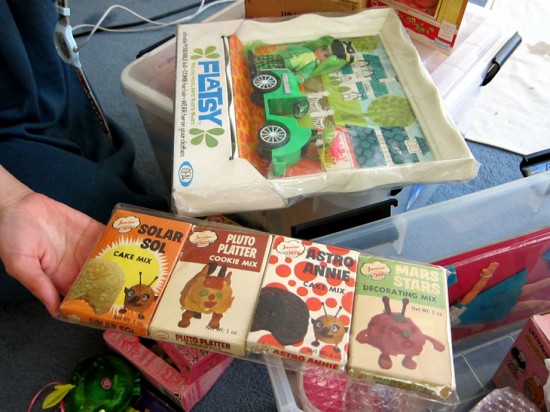 JB: Is it OK to take some pictures of your toy collection?

JM: Yeah of course. I can bring more.

JB: I will not stop that from happening.

[Junko brings in another bin of toys.]

JM: I’ve got more but I think I should stop here [laughs]… 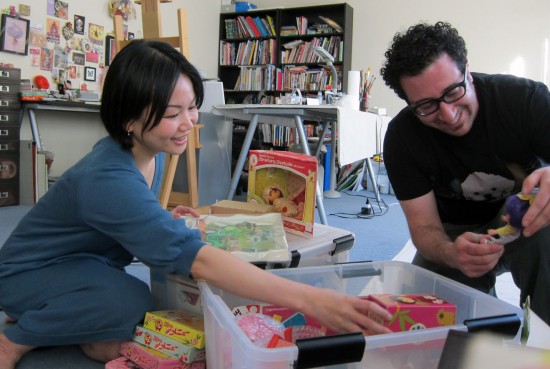 JB: How come this one gets to come out of the box?

JM: It looks best in the box with the design. She’s my favorite, so I got two.

JM: This one is Almond Tea. It still smells a little.

JB: Tell me about these boxes.

JM: This is a toy baking machine, and this is the box for the powders and cake mix. I like the design. 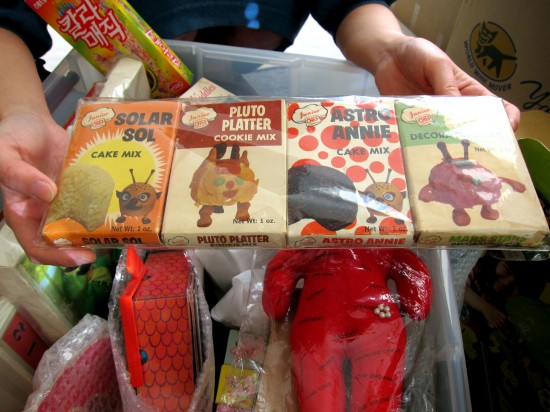 JB: Some people would say it was ugly; but I think the crudeness is cute.

JM: I like this kind of imperfect cuteness. They are trying to make it look cute, but it’s not. Recently some Japanese cute characters are too perfect. To me, it feels like they know that they’re cute. These guys [baking mixes] are kind of sad. I like that.

JB: I think I read that they’re making them again with eco-friendly lightbulbs or solar panels or something….Tell me about these little dolls.

JM: These are Liddle Kiddles. At first they were just tiny dolls, then they got tinier and started being inside things. 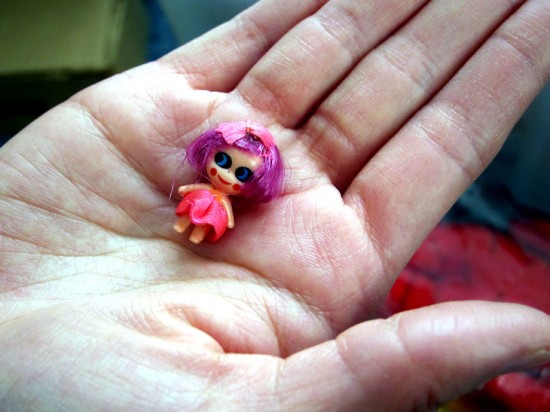 JB: Is that a perfume bottle?

JB: The face shape is interesting. She has a…very pronounced jaw.

JM: When I was collecting in Japan, I used to go to toy shows with friends. They kept telling me that the dolls were too ugly. 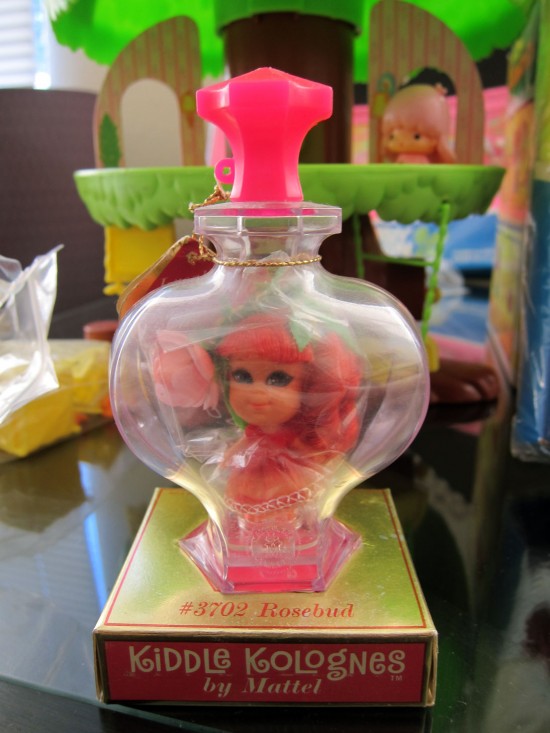 JB: So what about a Junko Mizuno tiny toy playset?

JM: I’m thinking about it. It’s difficult to do with big companies, but I have a guy who does toys in Japan who wants to do something with me.

JB: Did you interact with your toys when you were younger?

JM: I made stories. Just changing clothes is a bit boring.

JB: When did you go from playing to drawing your own characters? 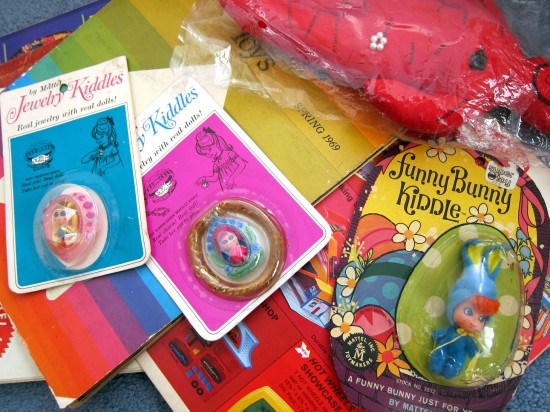 JB: Did your family encourage you?

JM: Um…my father didn’t care and my mother said that it’s good to have hobbies you can get into, but don’t get too much into it. I was always drawing and didn’t go outside to play with other kids. I think she was a bit worried. I was very serious and even set deadlines for myself as a kid. I made handmade magazines and showed it to my older sister. It was fun.

JB: Is that the way you are now?

JM: I like to set a goal. Of course I enjoy the process too.

JB: Were you into babydolls? 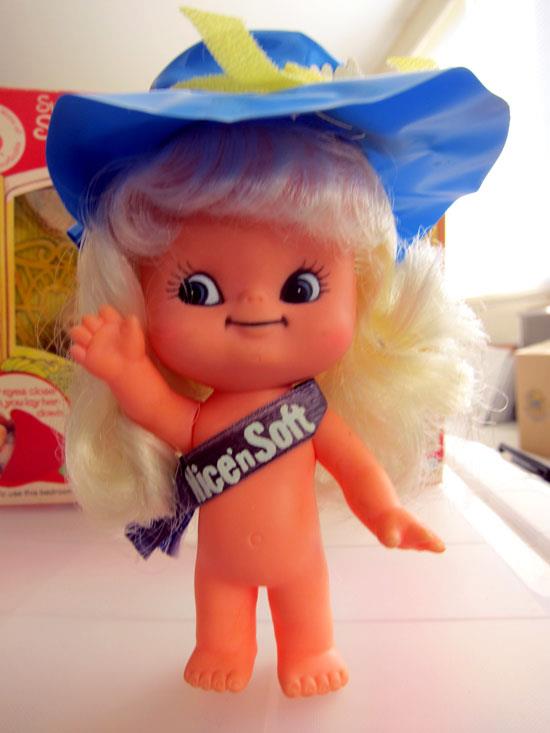 JB: They make TV shows about that now. Tell me about this Nice-N-Soft doll?

JB: I think this is from the U.S. I bought it from a Japanese dealer though.

JM: I just thought she was cute and funny. She’s all naked but wearing a hat.

JB: Yeah, you learn a lot about her priorities. She went and put on her hat, but she skipped the rest of her clothes. 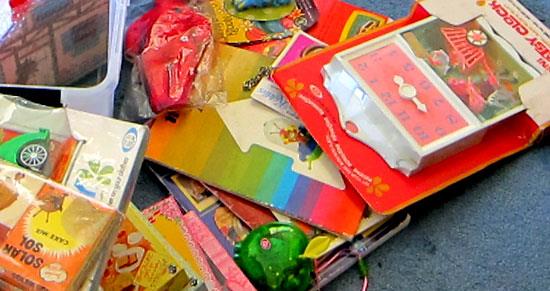 JB: Me too. Do you have a favorite color?

JM: I don’t have a preference, but I like the bright colors from the 60s.

JB: I’m going to take a wild guess and say that I think you were probably not into Barbies.

JM: I’m not a big fan of Barbie, but sometimes they make something really strange. Have you seen The Birds Barbie? I wanted to have that Barbie. Barbie being attacked by birds [laughs]. I always check the Barbie section [at the store] for anything weird. 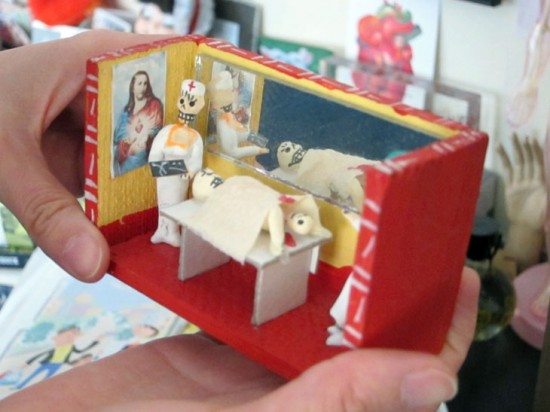 JB: Was Barbie big in Japan?

JM: Barbie had a hard time in Japan. First they imported it from the U.S., but she looked too mature. Girls in Japan couldn’t relate. She was too adult and not popular, so they gave up selling it in Japan. Then some Japanese company bought the license and made a Japanese version of Barbie. It has recently changed to become more similar to the American Barbie…I like the miniatures. These are foods for Rikka-Chan. I was not a fan of Rikka-Chan but I was fascinated by the furniture and food.

JB: Have you heard of Re-Ment?

JM: I was totally addicted. That was the last toys I was collecting. I still have a lot at my parents’ house in Japan. [Re-Ment miniatures] used to be really good, but now they are collaborating with Disney and making Mickey-shaped cakes.

JB: This is so small, yet there is so much detail.

JM: I remember when I was drawing my comic, When I get tired or ran out of new ideas, I would stare at it. 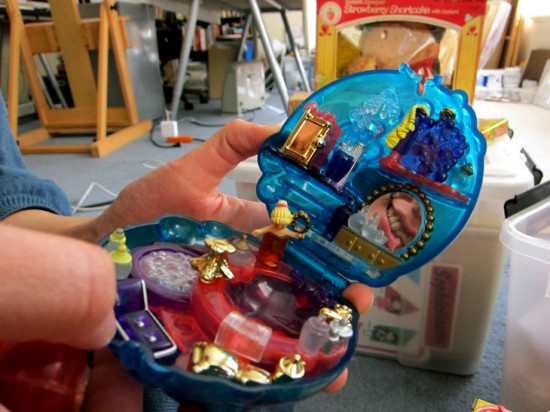 JB: It was inspiring?

JM: Yeah, you can carry it around and escape from reality. That’s important for me. Looking at toys is creating a fantasy world.

JB: When you got to make your own toys, were you thinking about other people’s escapism?

JM: It would be great if people were doing it. 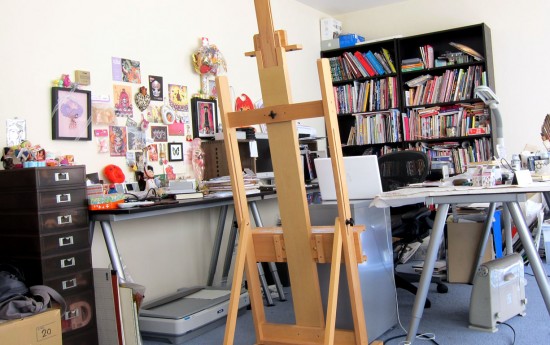 JB: OK so before I started recording, you were saying you decided to put everything away. Let’s revisit that now…

JM: It got very distracting to have too many things around. I use toys for reference and inspiration, but I wanted to make it easier to find when I wanted a specific one. I still appreciate toys, but I don’t need to display.

JB: Do you feel like you know where everything is now, like if you think: I need to find Polly Pockets I’ll look in this box?

JM: Yes, I put all Polly Pockets in the same box.

JB: I admire your sense of order, but I think you need to put your toys back out. What do you do for fun besides making art?

JM: Eating and sleeping [laughs]. I enjoy walking around…and going to museums. Everything I see is connected to my art. I get inspired from almost everything. 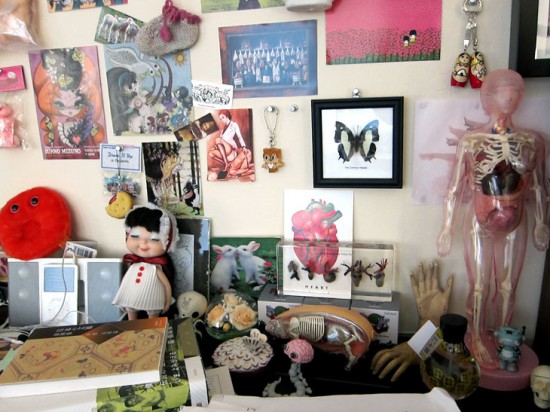 JB: How do you keep track of your ideas?

JM: It depends. For stories and comics, I type it and save it in my computer. For paintings, I have a sketchbook. Also, I have so many ideas in my head.

JB: Do you think people have any misperceptions of you?

JM: It’s interesting the images people have. Some people want to think that I’m mentally ill. I’m just making things I enjoy. That’s what I’ve been doing since I was very little. I just love creating. I feel lucky there are people who enjoy it, and I am able to make a living doing it. 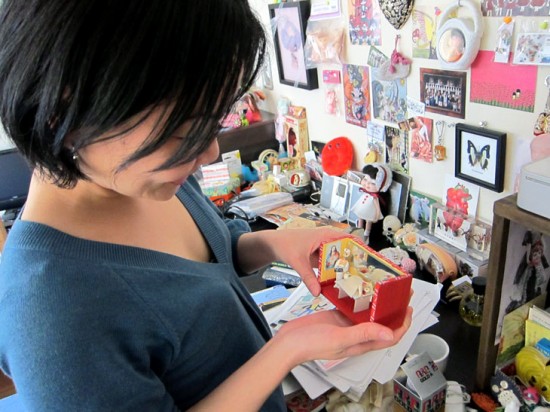 JB: If you could go back in time, what time period would you visit?

JM: I would go back to the late 60s and buy a lot of toys. That’s been my dream. I want to see these toys actually being sold in stores. That would be amazing. I’ve had that dream when I was sleeping, and I’m always so disappointed when I wake up.

JB: Oh man, I know what you mean. Is there any particular country you’d go back to in the 1960s?

JM: If I had to choose, it would be Japan and the U.S, but I would like to try different countries. I used to have this nightmare where I find really good toys I’ve always wanted, but they’re on high shelves and I’m on a ride. I try to reach them with a stick, but I can’t get them. Maybe I was under a deadline. 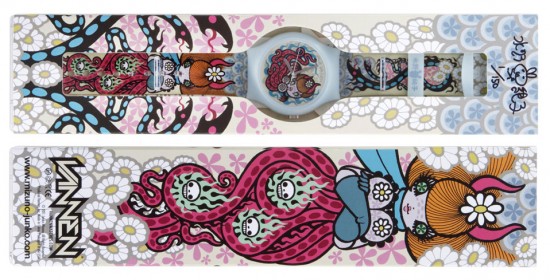 JB: OK speaking of deadlines, I know you are busy, and I should probably ask you a few questions about your watch. Thank you for showing me your toys.

JM: It was fun, it didn’t feel like an interview. I forgot about some of the toys. Maybe I’ll put them back up…tomorrow.

Junko Mizuno’s Cirrina for Vannen Artist Watches is currently sold out on Vannen‘s site! Click over anyway, and look at some other fine watches though. While you’re there, read the watch-centric portion of my interview with Junko here.