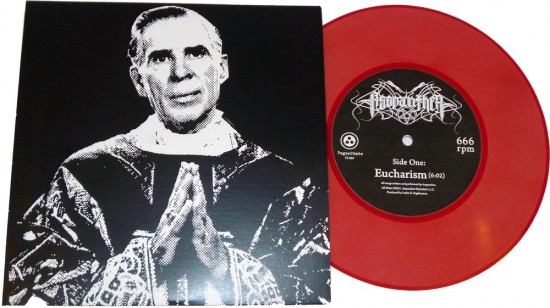 I’m going to cut to the chase for folks who might not have all day: I LOVE THIS. Why do I feel the love for Abe Lincoln Jr.‘s fictional record label, Fugue State? Because it’s going to make people think, and most of them will probably respond with some version of this: “Let me get this straight: you’re pressing records, but there’s no music on them?” That is so dada or punk or insert whatever near-cousin of a label makes you feel comfortable. Or uncomfortable. 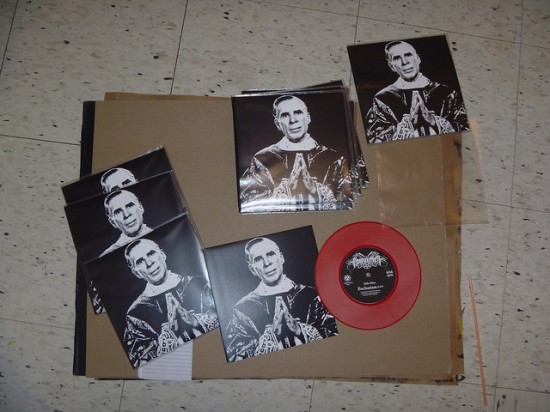 Abe Lincoln Jr. has gone to great lengths to create a concept album that is, in itself, the concept. The press release says: “These are NOT real 7″ records with music on them,
they are Design Objects meant to be displayed with the rest of your Art collection.”

Lincoln Jr. wrote a whole story for each record. He also worked with a designer on the graphics logo. In the case of Asspanther, it’s Russian artist, A.K.

Fans of the international Black Metal scene will note that Asspanther has long been considered the premier Icelandinc Black Metal band. Their brutal metal onslaught has frightened censors here in the US and their anti-religious songs “Eucharism” and “Religion is Mind Control’ lash out at the hypocrisy found in the houses of the holy all around the world. 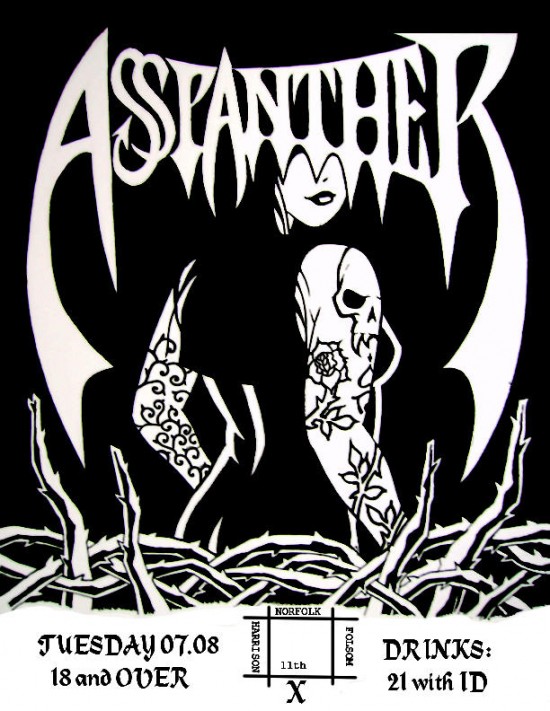 Even local artist Bert Gatchalian is in on the release, having created the fake-ass Asspanther flier above.

Sometimes I enjoy art that is so perfect it seems like it could have landed on earth mere moments before. On other occasions, I like to geek out on the process. Fugue State Records is a process-lovers art project. Abe Lincoln Jr. is laser etching blank limited edition 7″ records by bands that don’t exist. To support the releases, he’s also doing other “artist multiples” (aka merch) like t-shirts, gig posters, stickers & zines.

Here’s another poster by MATS!?! 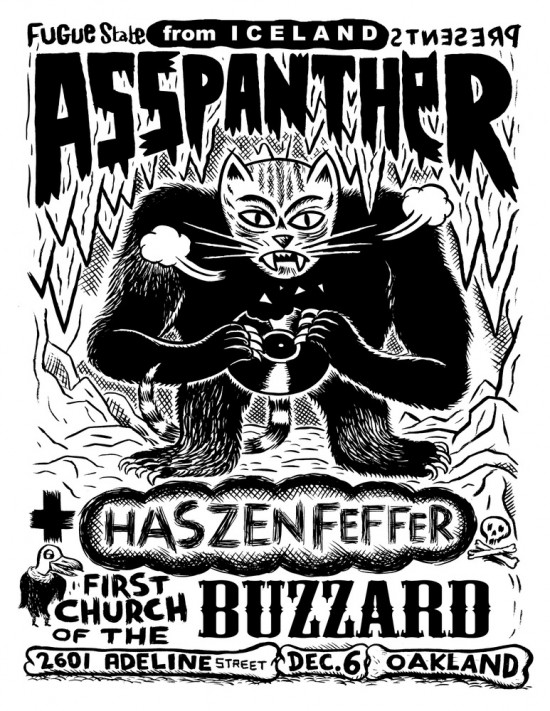 The goal with the project is to tell the story of Fugue State Records, creating a world that has continuity. There will be multiple releases from the bands on the Fugue State label roster. New bands being signed and old bands moving on or breaking up. The project is meant to be ongoing. I plan on doing multiple art shows/record releases and putting out new Multiples regularly.

How to get it: Asspanther’s inaugural North American Release, Eucharism, will be available exclusively through Wootini Gallery at the Blood Brothers show in North Carolina running March 4th – 31st. The Eucharism 7-inch contains the “tracks” “Eucharism” and backed with “Religion is Mind Control”. This edition of 20 pieces is laser etched red acrylic plastic, with a digitally printed sleeve and retails for $60 USD. There is also an edition of twenty 22×30” silkscreen poster on 250gm paper, available for $40. After the opening, the Objects will be available online at Wootini’s site until the show comes down. Any remaining singles/posters will be available online at Abe’s webstore.